Vienna – We See the Fall 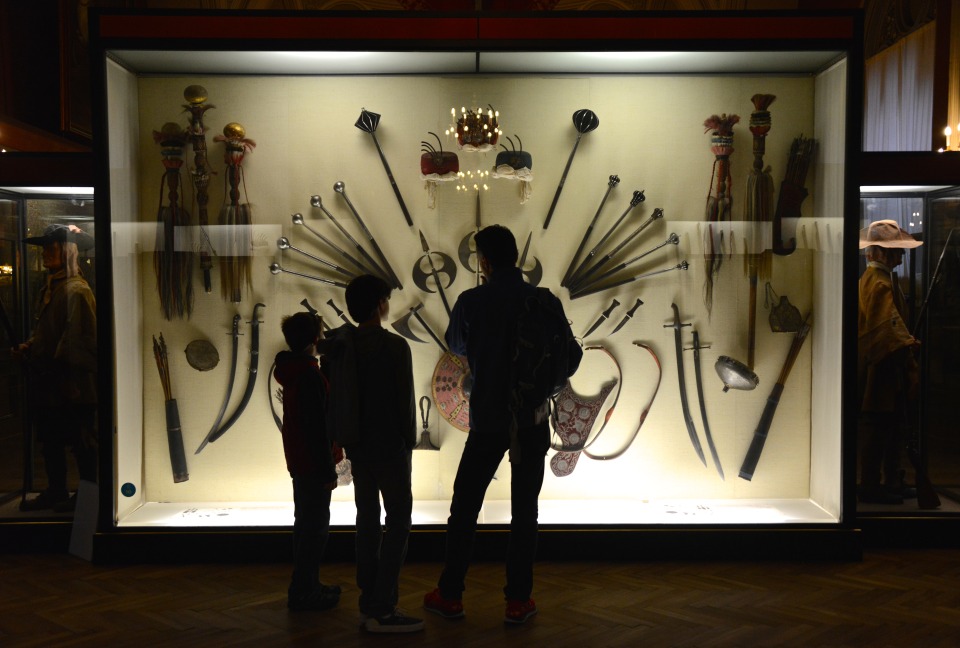 It was late October and we hadn’t yet experienced cool autumn weather. Other than our time in Iceland, most of the weather had been warm or hot. We really wanted sweater weather, something that would require us to bundle up before heading out for the day plus we’d packed for it – sacrificing what would have been more useful short-sleeve shirts and light pullovers for heavier wear. When we arrived at the Vienna International Airport, we were finally rewarded with an icy and wet wind.

I first discovered Vienna in college. My German Civ professor anchored the semester’s discussions in the non-fiction book “A Nervous Splendor,” set in Vienna in 1888-1889. The book was so richly crafted that I felt I’d been to Vienna already, and as we approached the city, I was excited to see with my eyes what I’d seen years ago with my mind – sites like the Ringstrasse, the Danube, and the Opera House.

The flight from Dubrovnik to Vienna was short, but we’d skipped a proper breakfast and lunch so we needed an old-fashioned, stick-to-your-ribs meal. Angela booked us at a joint called Ribs of Vienna, which was in the vault-like basement of an ancient city building. It was touristy, but we didn’t care. We try to eat local as often as possible, but strange foods sometimes make us more homesick and it’s nice to see the familiar once in a while. The menu was hearty with lots of potato dishes to accompany the 18 rib flavors, from spicy to sweet. Most of the waiters spoke multiple languages with ease – ours was Italian but he cracked jokes in Hungarian with the table next to us. 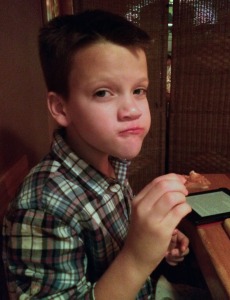 Our first morning in Vienna was a challenge. There are few things in the world as debilitating as blackout shades in a hotel room with the gentle patter of rain on the windows. Cuddled in our warm blankets with no set schedule and deep road fatigue in our bones, we did the only reasonable thing: we slept in.

Viennese cabs will only pick you up from an official taxi line. On the streets in the cold rain, we wandered the neighborhood for nearly 45 minutes before Asher spotted a line right by our hotel. Our driver spoke no English, so I pointed to the map and showed her our intended destination – the Heeresgeschichtliches (Military History) Museum.

DECLINE OF THE HABSBURG EMPIRE

The museum claims to be the oldest and largest purpose-built military history facility in the world; but more importantly, it houses the car in which the Archduke Ferdinand was assassinated, the (still blood stained) uniform he wore that day and the pistol used by his assassin, Gavrilo Princip. The items are part of an extensive WWI collection. Taken in total, the museum includes artifacts covering 500 years of Austro-Hungarian military power and as a result documents its own political and financial self-destruction. 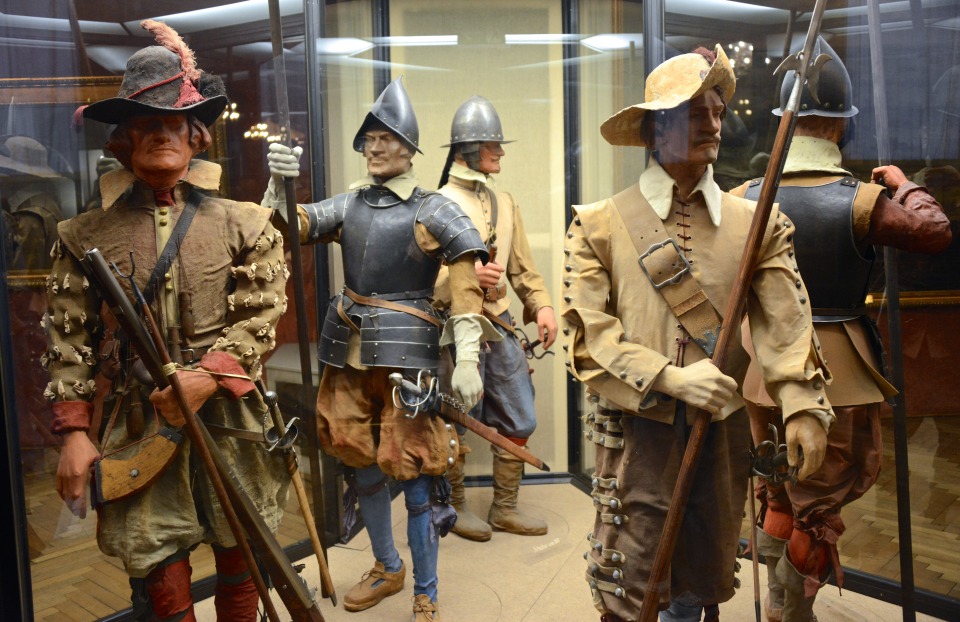 Archaic weapons of warfare on display – muskets and snappy legwear.

Since the study of WWI and WWII is a theme of our travels, we spent a lot of time talking with the boys as we toured the halls. We were particularly interested in how countries we visited –Austria, Hungary, Germany and the Czech Republic – talk about their roles in the rise of the National Socialists (Nazis) and their participation in the Holocaust and war. Within the museum’s huge WWII wing, they presented a vast array of propaganda posters, Nazi flags, uniforms and equipment, but only one concentration camp uniform and a tiny section dedicated to the Holocaust. And their presentation of Austria’s role in the war was morally ambiguous, framed on one plaque as, “wherever the Nazi’s went Austrians were there.”

After our visit we trudged through the cold and wet Schweizergarten toward Belvedere Palace. We were mostly alone in the park, with only dog walkers and quick-paced commuters coming from the subway station on the other side. The beergardens were empty and the cafes shuttered, and the mood was serene as the trees’ orange and red leaves fell with the raindrops. We meandered to the subway station on the other side of the park. Although it took us a while, we figured out the public transport system well enough to get us back to a nice hot dinner at a Japanese restaurant near our hotel– veggie udon, miso soup, fried rice, tempura chicken and a sushi boat for me.

The weather was still cold but the rain had stopped. Feeling more comfortable, we hopped on a tram around the famous Ringstrasse. The first attempt put us on a tram headed in the wrong direction, but it looped and we rounded central Vienna, exiting near Burgring and Maria-Theresien-Platz. After a brief walk around the park, we crossed over to Heldenplatz where the Austrian Armed Forces were hosting a full-on recruitment carnival – complete with attack and support helicopters, assault vehicles and tanks, and lots of camo’d guys handing out free stuff. The boys enjoyed climbing on one of the tanks but declined the opportunity to enlist in the army. 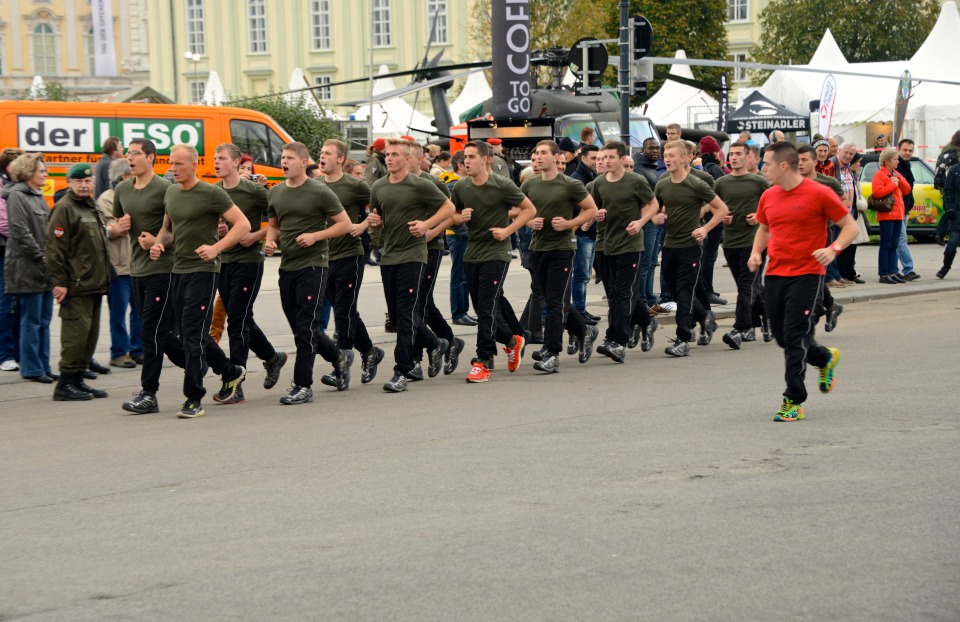 THE VIENNESE COFFEE HO– USE

The Viennese Coffee House Culture is a thing. By that I mean it’s recognized by UNESCO as part of society’s “intangible cultural heritage.” Nice, but coffee don’t need no stinking badges. Coffee houses are for coffee lovers as brewpubs are havens for beer lovers. So we quested for one of the many famed coffeehouses – Café Mozart. It was touristy, but it offered a slice of a bygone era in Viennese living. Many of the patrons were elderly couples or friends, dressed up in skirts and heels or jackets and neckties and enjoying a civil luncheon complete with white linen, tuxedoed waiters and candles. After enjoying our first experience with authentic weiner schnitzel, we rounded the corner to The Sacher Café for Turkish coffee and desserts – the Original Sacher-Torte and Apfelstrudel. It wasn’t cheap – one cup of coffee, one small water bottle, two pieces of Torte and a strudel rang up at $45. 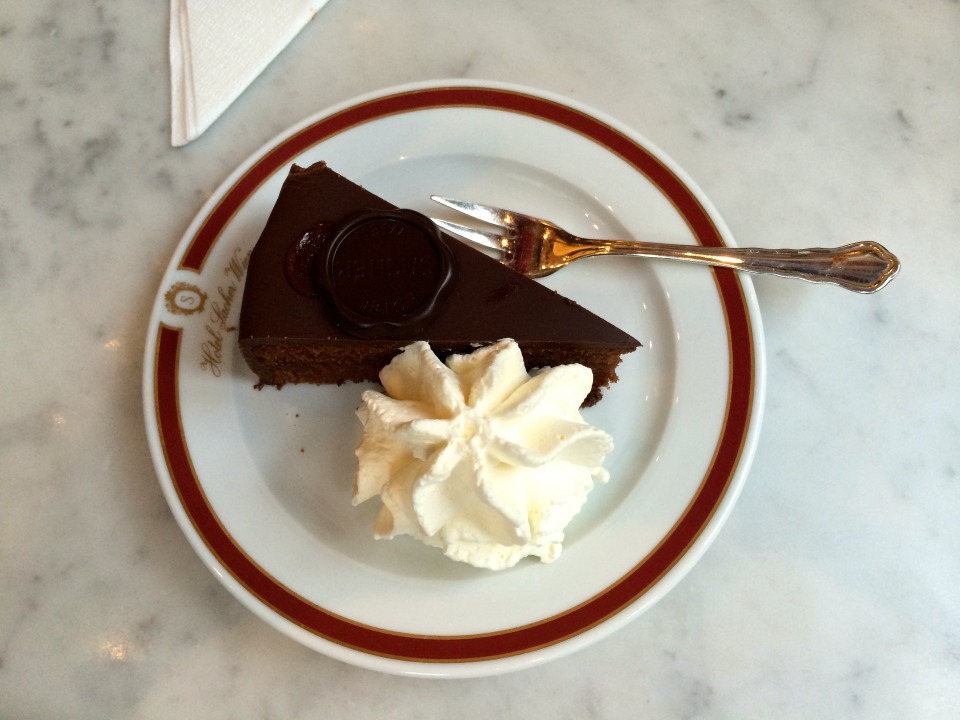 We were belly-sloshing full, so we walked back to our hotel on the other side of town. Straight through the gut of central Vienna we headed, shoulder to shoulder with bustling crowds on a late Friday afternoon. Vienna’s heart is vibrant and, despite the chill in the air, locals and tourists commingled to create a warm atmosphere. We found our way back to the Ringstrasse and strolled slowly along the Danube with Johann Strauss waltzing through our heads. The river wasn’t blue, but no matter. With the late afternoon sun finally getting an opportunity to peek through the clouds, the city was luminous. It was a beautiful way to end too brief a stop in such a lovely place.

We met Ümit after breakfast as he hustled up the sidewalk to the hotel doors, intent on carrying all our bags to his taxi in one trip. “I’ll get it,” he said, pointing out the remaining two bags pressed up against the building. Ümit was to deliver us to Wien Meidling Train Station. He was very nice and his English was excellent, though he apologized and seemed embarrassed when he’d get stuck on a word or idea. He was very open and shared that he was from western Turkey but had lived in Vienna for the past 13 years, having recently earned his law degree. His wife was finishing her degree and once complete they hoped to return to their homeland. Settling into the subject of family, he shared the numerous troubles he’d faced as the son of an alcoholic father, and explained the significance of it through parables from the Quran. When we shared with him our desire to visit Turkey someday, his eyes opened wide and he grinned broadly. Ümit was an excellent ambassador for his country – very proud of its history, culture and religion. Although the cab ride lasted only twenty minutes, we learned a lot about one another and parted as friends.

The good news was that we arrived at the train station very early, as we’ve been trained to do for air travel. The bad news was that an early arrival doesn’t matter when there are no security checks to navigate nor any lounges to sit in. So we stood on the platform and waited…in the morning fog…the very cold morning fog.

The bad news was that our train to Budapest, the one and only train to Budapest that day, was cancelled. Further, it was Saturday and the ticket booths were devoid of anyone to help us. However, the good news was that after twenty minutes of worrying and just starting to formulate a solution, the board showed that a replacement train was on the way. For the record, adrenaline is a quicker pick-me-up than a Viennese coffee house, though not nearly as enjoyable.