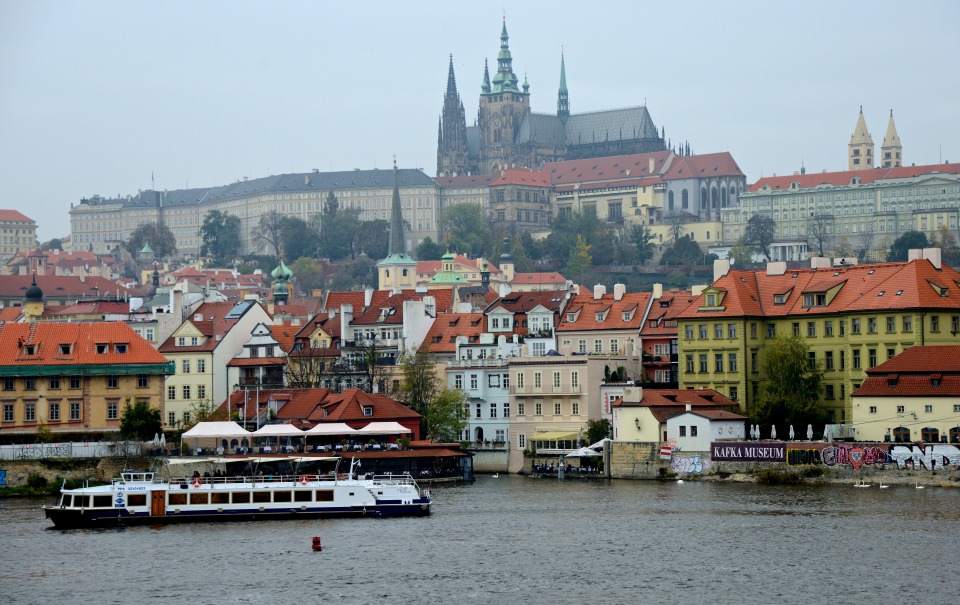 They say that Prague is one of the most beautiful cities in the world, but we arrived at night so had to wait until morning for proof.

Our train from Budapest to Prague was eight and a half hours, and we were exhausted. Unlike the ultra-clean and modern trains in Switzerland and Austria, this was old and clunky with compartments that seated six, so we were pressed into a small box with strangers.

At Prague Main Railway Station, we were greeted by a driver who wore a grin beneath a substantial mustache. He was exceptionally eager but he spoke no English, and we needed to find an ATM to get koruna to pay him. After a clumsy attempt at sign language, we pronounced “bank” as “bonk” and bam! He understood.

After very nearly being mugged in Madrid twenty years ago, I have become a vigilant traveler – hyper-aware of our surroundings and our guides/drivers. The political backdrop of our travels included a broad call for jihad from ISIS and increasing tensions between the world and Russia who was flying bombers over Europe. I watched our obsequious yet pleasant driver closely (as I do everyone) as we zigzagged through the murky night, and crafted a mental map of where we were in the city. Just in case.

My worry increased when we turned down a dark avenue empty except for a heavy fog. Streetlamps half hidden in the low mist reflected dully on the worn cobblestones. A car facing us turned on its high beam headlamps and two men stepped out with flashlights and automatic weapons. Our driver shut off the engine, turned back to me still smiling and said something in Czech I didn’t understand but picked up an important word … “bomb.” Above us rose the famous Prague Castle, silent and formidable while I ran through all kinds of scenarios where bomb and this situation made sense. But the men looked bored and only glanced at the driver’s credentials. They still flashed their lights on each of our nervous faces, but we were free to go after only a couple of minutes delay.

It turned out that our hotel was only a block from the U.S. Embassy and this security detail checked every vehicle going into the perimeter. They were looking for bombs.

Anyone who keeps the ability to see beauty never grows old, said Franz Kafka who was born and is buried in Prague. And indeed, Prague is nothing if not an urban manifestation of eternal beauty. So while we endeavored to remain young in heart, we appreciated the passage of time as Ronan celebrated his birthday.

CZECH FOR BIRTHDAY CAKE IS TRDELNÍK

We slept in before setting off for a tour around the castle. From our hotel to the castle wasn’t more than a half a kilometer, but it was all uphill, steep enough to need steps. Still, we marched slowly upward. 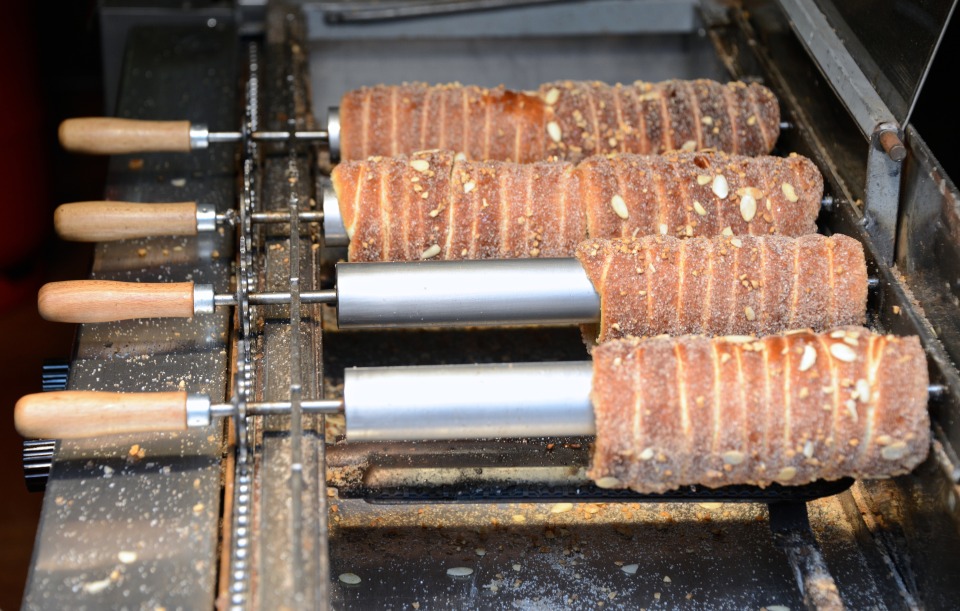 On the way, we found little shops selling locally produced crafts, souvenirs and drinks, but almost missed a window that opened directly onto the sidewalk. In the darkness, an elderly woman stood smiling as she made fresh trdelník (Czech’s version of the chimney cake). Ronan, who’s not usually enamored by sugary treats, found the chimney cake variants of kur (Budapest) and trdelník (Prague) irresistible. Easy to understand, as it’s a pastry flaky on the outside and doughy on the inside, coated in butter, sugar and cinnamon. It’s like a giant deconstructed cinnamon roll. Since it was his birthday, we bought one for him on the way up to the castle and another later on the way down.

The day was cold and the air so damp that the chill clung to us no matter how much physical effort we threw at it. Around the castle grounds we walked, looking down upon the gorgeous city and river below. We circled through the St. Vitus Cathedral and past the Royal Palace, freezing in the cold autumn air, before finding a café with free blankets and hot chocolate. Ronan’s birthday dinner was a big deal for us – an American-style steakhouse on the other side of Prague. Life on the road sees more homemade sandwiches and Pringles than white tablecloth service, but this was a celebration. Ronan was becoming a teenager. The tuxedoed servers were fluent in multiple languages, the exquisite meats were presented on a gilded cart and the sommelier was…well, there was a sommelier. Ronan ordered and consumed the biggest steak they had on the menu and we cheered him onto another fine year. 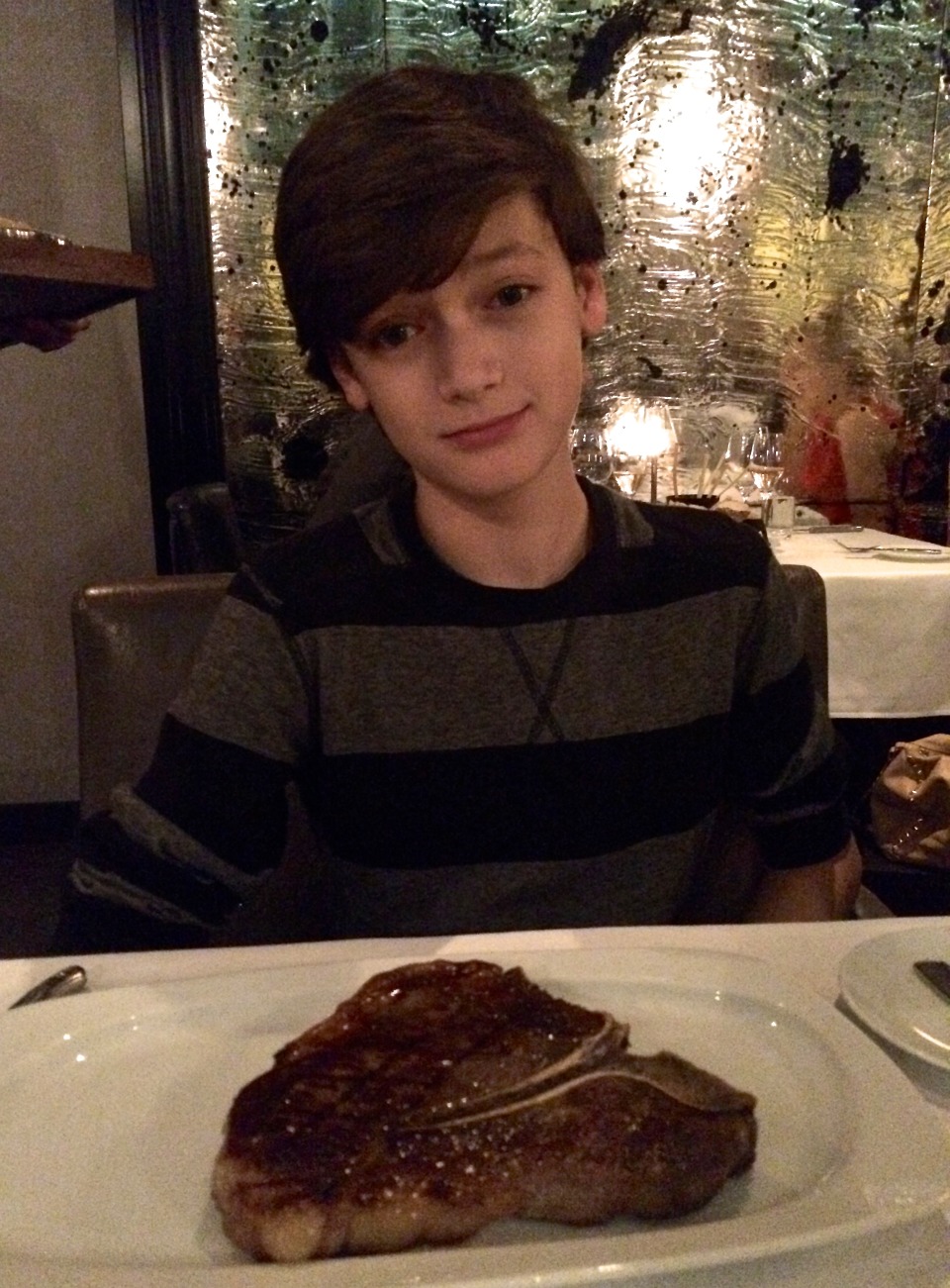 HALLOWEEN ON THE ROAD

Back in the U.S. it was Halloween. We imagined our old neighborhood beset with costumed kids and parents going door to door in search of treats. We didn’t have costumes, but we too were walking the neighborhoods in search of visual (and sometimes edible) treats.

Eva, a local tour guide and historian, walked us through her town for four hours. It was funny, but the whole thing felt familiar to me. I told Angela I was having déjà vu as we walked down toward the river, past the John Lennon Wall and across the baroque Charles Bridge. As we passed through the Jewish Quarter and by the enormous Jan Hus statue then entered the Old Town Square, I figured it out. I “toured” this city with INXS in 1988 – in the “Never Tear Us Apart” video. It was the clock that brought the memory into full detail. 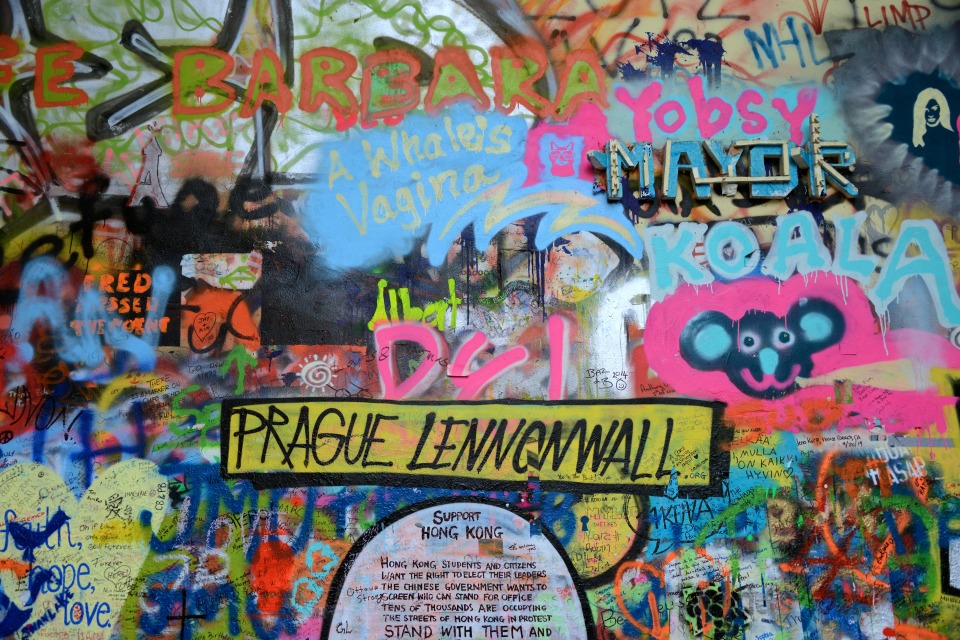 Lennon never visited Prague but they like him anyway.

The clock that stands three stories tall on the southern wall of the town hall in Staré Město, or Old Town, is kind of a big deal. It’s called Orloj locally, more formally Pražský Orloj, but is known around the world as the Astronomical Clock of Prague. It’s a mecca for horologists, a “must see” for tourists and a tremendous source of pride for the Czechs. Orloj looks like a mix of Notre Dame, Spirograph and cuckoo clock – gothic, geometrical and elaborate with plenty of moving bits. It is incredibly beautiful.

Two ponderous faces mark minutes, hours, months and the positions of the sun, moon and earth in brilliant polished brass and iron; the city’s four menaces and four virtues are each represented by individual figures – death as a skeleton and vanity who looks at himself in a mirror; the Twelve Apostles each ramble by when the clock chimes. For three minutes each hour, it holds rapt at its feet crowds with cameras held overhead to record the elaborate movement of time. The event ends when a cockerel flaps and crows, the Apostles cease their procession and Death rings his bell. The crowd scatters, but looks back over its shoulder in hopes of seeing something more. The Astronomical Clock of Prague.

Time is an illusion. Lunchtime is doubly so, said Douglas Adams. And indeed our tour through Prague meant it was now 2:03p and we’d yet to eat. So we said our thanks to Eva and ducked into a little café for lunch.

THE GOLEM OF PRAGUE

In the Jewish Quarter, we learned the tale of the Golem of Prague, a monster given life out of clay from the Vltava River in the 16th century by Rabbi Loew. The golem was created to protect the Jewish ghettos from pogroms, anti-Semitic attacks that were proliferating under the reign of Rudolf II of the Holy Roman Empire. There are many versions of the story, about how the golem was accidently left alive on the Sabbath or that it fell in love and went on a rampage through the Old Town. Eva showed us the attic where the golem was kept when not in use by Rabbi Loew – steps are only accessible from the outside, and that no one is allowed in the attic to see if the golem still lives or if there is a mound of clay left. It made for a great story. Autumn asserted itself on our final night in Prague. We walked around in the cool night, stopping off for a traditional Czech meal – cabbage soup and guláš with a local pilsner.

One of the things we learned during our travels, attenuated in visiting the countries formerly under oppressive regimes such as Hungary, Czech Republic and Croatia, was that our hosts were very open about politics. Whether taxi drivers or waiters, guides or innkeepers, they would often share sharp and divergent opinions about their country’s current issues. For example, we spoke with a gentleman in Croatia who felt the break up of Yugoslavia had been an enormous mistake – costly in both economic and human terms. “We killed a lot of people during the Homeland War so that we could experience independence. But we lost more than we gained.”

By contrast, it was over a cup of coffee in a café that a gentleman shared his fears that Hungary was slipping back toward being a satellite of Russia. “Look at the friendship between Orban and Putin at a time when your country (the U.S.) refuses Visas for our top ministers. Why isn’t anyone in my country demanding answers?” The only exception to the open dialogue was in Scotland, where the vote of independence was the centerpiece of public discourse while we were there. Although we saw lots of “No” and “ Yes” signs, not a single person shared their position on the matter. And we didn’t ask.

It’s been said that the primary purpose of art isn’t to imitate nature or force us into political debates or to make our surroundings more colorful, but rather to give humankind a channel for its own spiritual expression. When you experience a beautiful world, you learn something important about yourself and your connection with your fellow human beings. You are seeing freedom on display.

They say that Prague is one of the most beautiful cities in the world, and they are correct.