Australia – On the (Left Side of the) Road Again 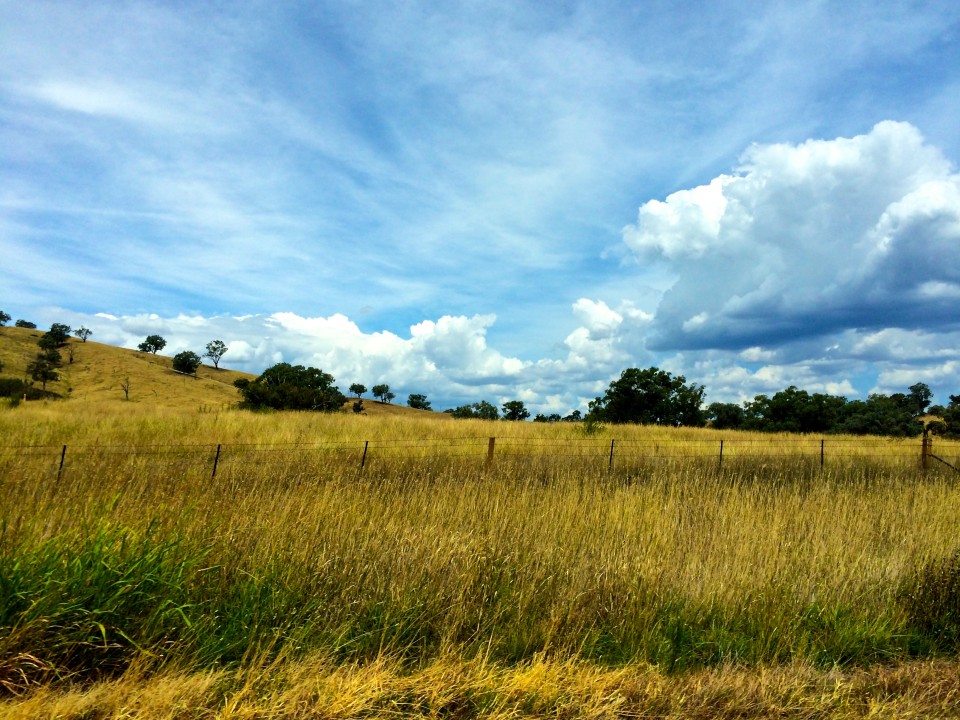 It was a long 15-hour flight from San Francisco to Sydney. We were feverishly exhausted, hungry and grumpy when we arrived at the queue for border control and customs. It took an hour to get through the process and then we were free. 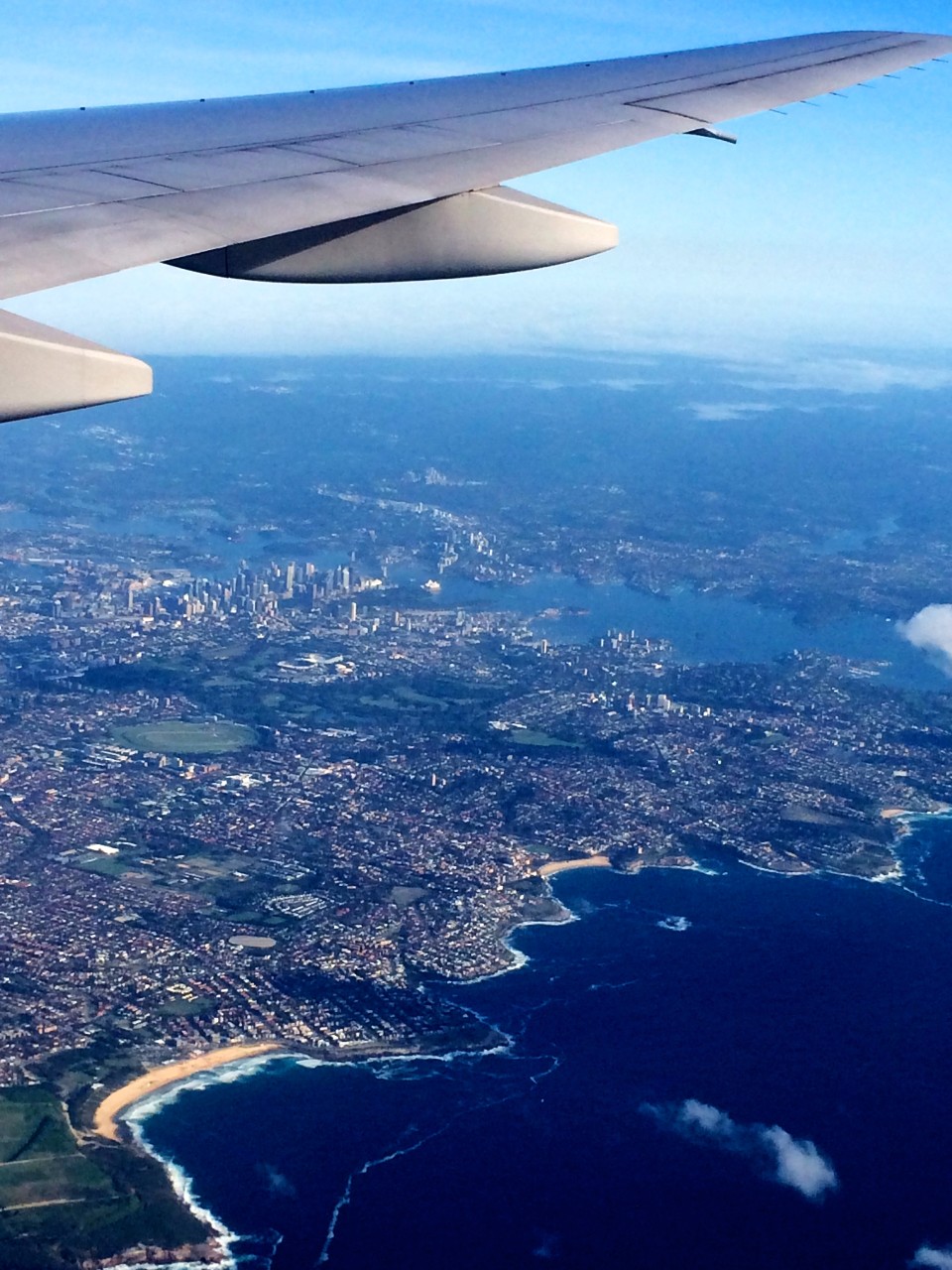 How hard is it to drive on the opposite side of the road? Not hard, really. It takes a little bit of time, an abundance of caution, and the humility to laugh at yourself when you activate the windshield wipers instead of the turn signal. How hard is it to drive on that side after flying across the Pacific? Very hard. Sleep is the only cure. Although every cell in our bodies was screaming for bed, we needed to adjust to the local timezone and that meant staying up for another 12 hours.

The hotel we booked in the Surry Hills district of Sydney wasn’t quite ready for us when we arrived. We needed to burn up about three hours but didn’t want to sit in the lobby. I wanted to walk the neighborhood because I hate driving immediately after a long flight. My coordination is off, my tolerance for other drivers is low plus I knew nothing about this city of 4.5 million people. Angela wanted to drive around to get a feel for the area because she hates when we walk around a strange neighborhood when we’re hungry and tired. We ended up picking a bad restaurant and grumping at each other about everything.

We ended up at a miserable Irish pub (even the chips were gross) and regretted it. Angela’s nachos had sweet and sour sauce on them instead of salsa. Worse, it was so close to the hotel that we still had two hours to kill, so we loaded in the car to drive around Sydney after all. I missed a turn and thanks to city’s one-way streets reached epic frustration levels simply trying to retrace our route. Eventually we returned to our ready and comfortable hotel room, where we finally got a decent meal of pizza delivered; then blissful sleep.

I was first to wake on Sunday morning and immediately set out in search of coffee. After a fruitless hour wandering around, pausing every time I thought I heard the crooning whir of a La Marzocco machine, I instead stumbled across a noisy casino with a surfeit of bleary-eyed patrons smoking cigarettes on the sidewalk.

I discovered a bit more of the area in the process. Sydney’s most important resident may be the ocean, which insinuates itself everywhere as a cool breeze – swirling around the buildings and whispering through the trees. I sat at the café and watched the city awaken. 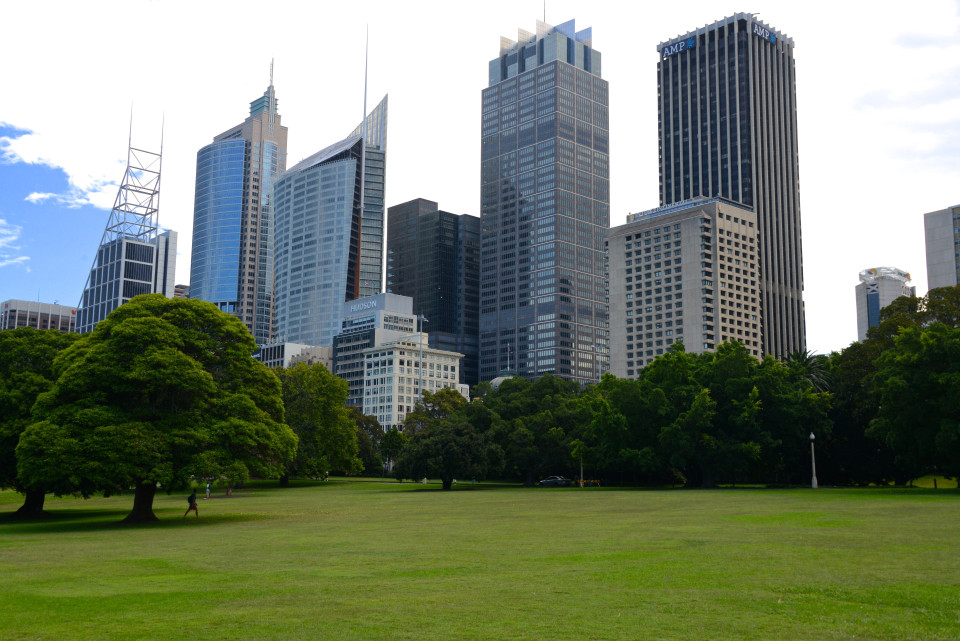 Our favorite way to explore is on foot. From Surry Hills into the heart of Sydney, our untrammelled exploration included famous landmarks such as the Sydney Opera House and the Harbour Bridge, but also nameless hidden nooks and cool alleys. We navigated thousands of tourists milling listlessly around Circular Quay and crossed over to the Royal Botanic Gardens. There we found a park bench beneath a fig tree and stared across Farm Cove toward Mrs. Macquarie’s Chair, giving us a moment to recover from the nearly six miles we tramped through the hot, hot city. The total cost of our Sydney tour = $0.

IN SEARCH OF … KANGAROOS

Worn out from the previous day’s trek, we opted for a day in the car to tour the Blue Mountains, a region just west of Sydney in New South Wales that looks more like a series of vast canyons and foothills to the Great Dividing Range. The aboriginal peoples have a legend wherein an epic fight between gods formed this range.

In the mountains we soon saw several cockatoos, but we were hoping to see kangaroos or koalas. We were wary of possible snake and spider sightings as well. Australia is home to ten of the top ten deadliest snakes in the world. To take a break from courting death, we enjoyed a brief stop in Kookabura for excellent Malaysian cuisine. 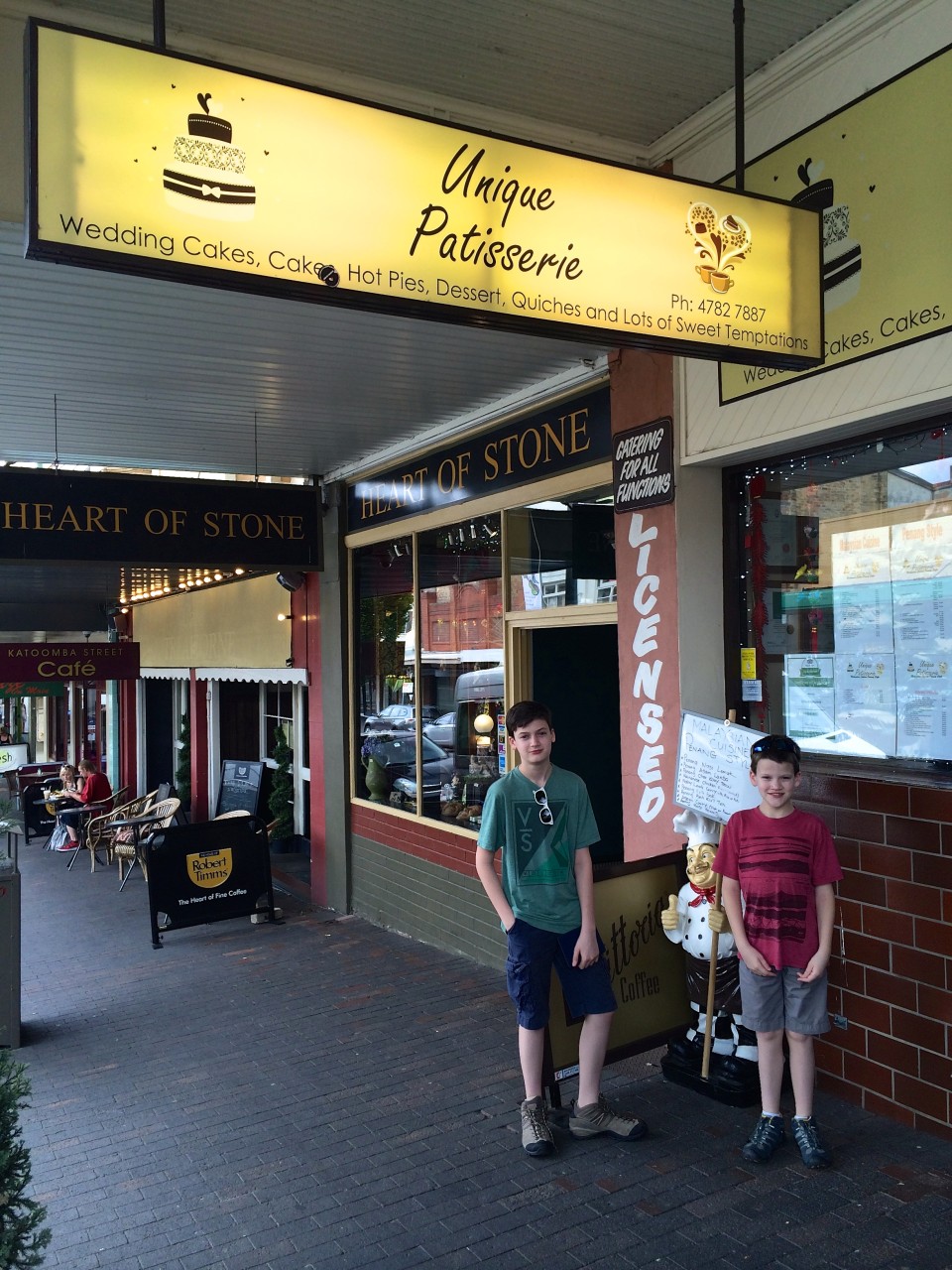 On our way back to Sydney we stopped at Euroka Field hoping to spot kangaroos in the wild. They hide among the trees during the heat of midday, but come out into the open to eat at dusk. The air was still stifling, and the drive into the area was down a winding, dusty and difficult road. We saw no one else on as we crossed a trickling creek, ascended an embankment and arrived at a broad undulation of short, thorny trees and wild grasses.

Just to our left in the middle of a meadow, two eastern grey kangaroos – a mother and joey – bowed and plucked at the ground. Our approach startled them and they observed closely as we slowly rolled down the windows for photos. No one joined us as we watched…it was just us and the roos. Down the road a ways on an escarpment above the river was a larger male kangaroo who came bounding over in a defensive posture once he realized we were checking out his family. 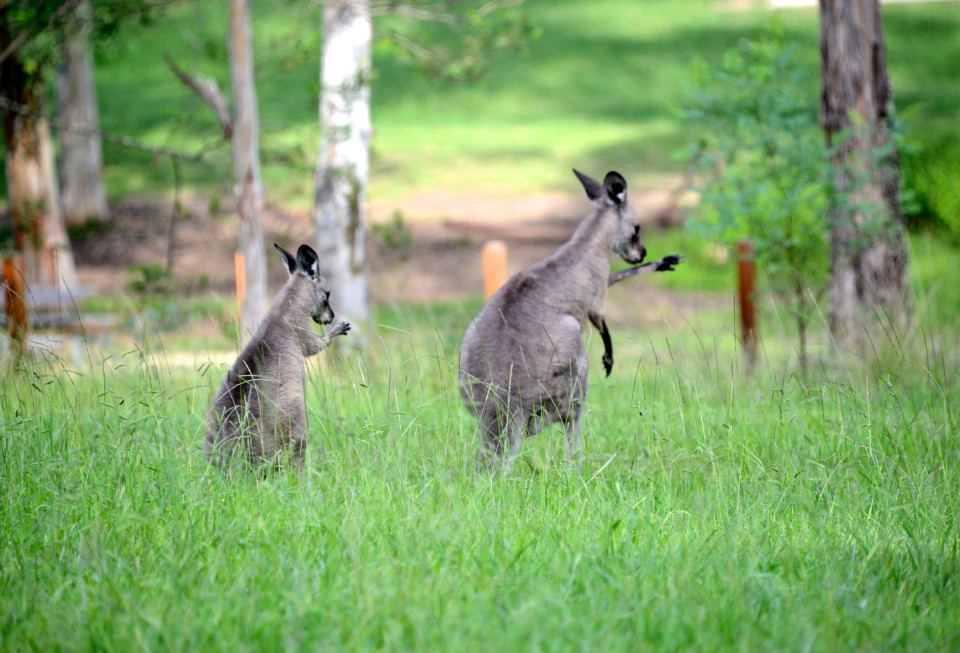 We sat and enjoyed the thrum of the jungle insects and the screeches of the gang-gang and sulphur-crested cockatoos. Alone. Just us and the noisy natural world.

THE SURF AND SAND

We needed to stretch our legs after the long day of driving so set out for for a hike along Australia’s famed coast at Bondi Beach. Only 20 minutes from downtown Sydney, it was an easy motor; despite it being a workday the beach was extremely crowded. Other than the fact that the sun hung over the land instead of the ocean, it reminded us of southern California. The walk was not very unique, but it was good exercise with nice views. Ronan in particular enjoyed the “bikini tops optional” aspect of the beaches along the path.

We’ve celebrated our birthdays this year in some pretty awesome locations – Angela in Paris, Ronan in Prague…and Mark in St. George (the Dixieland of Utah). It was Asher’s turn.

His birthday = his choice for how to spend the day, and Asher elected to visit a wilderness park in the suburbs of Sydney. We saw all sorts of indigenous creatures including bats, snakes, cassowary, Tasmanian devils, dingoes, koalas and of course kangaroos. Asher loves animals and they seemed well-treated at Featherdale, so it was perfect. 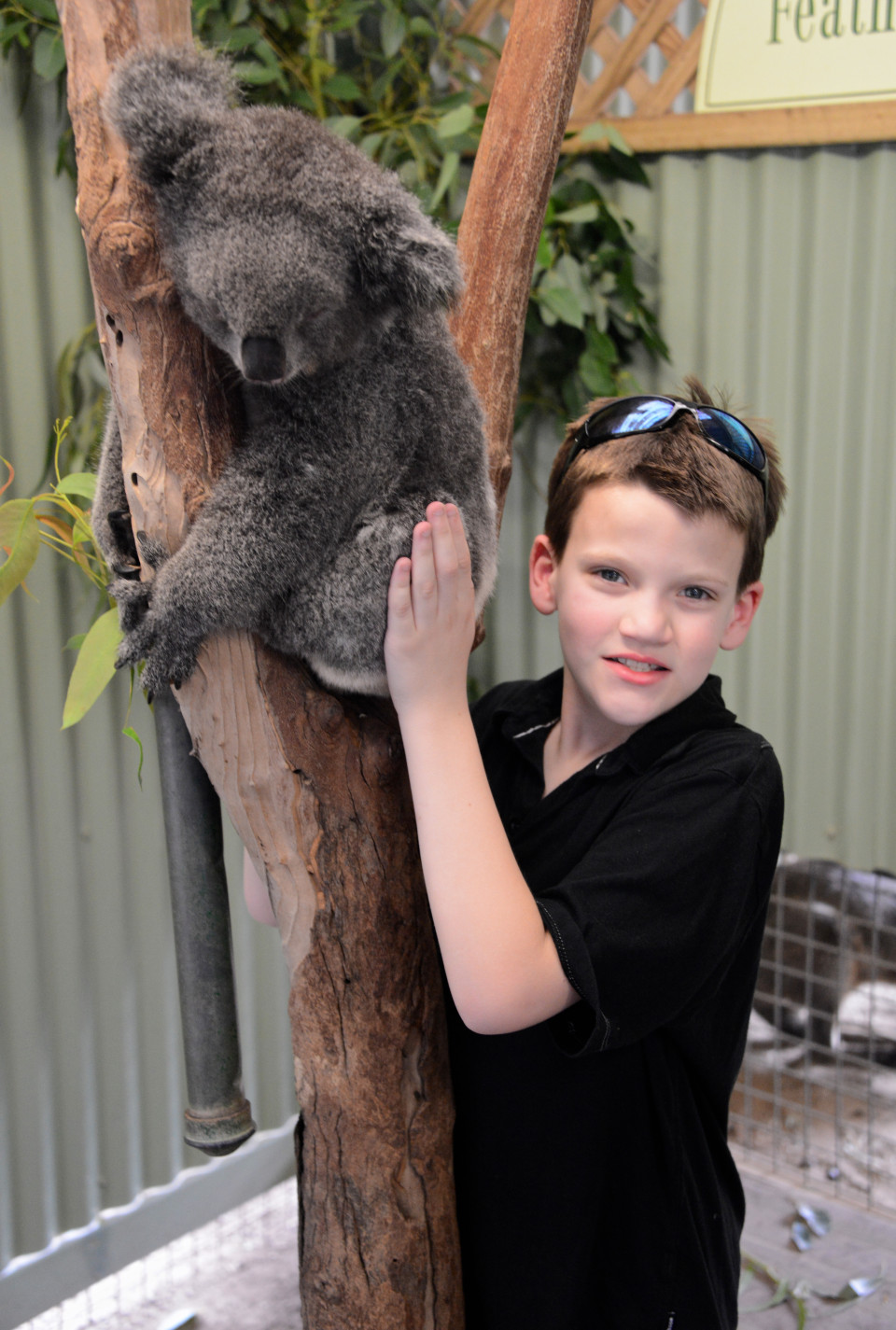 They say luck comes in threes, and our first piece of good luck was cooler temperatures. In spite of the hot and humid day, most of the animal exhibits were beneath spreading trees providing pleasant shade. The second was that we arrived as the last of the early morning tour buses was leaving, so the animals were plenty mellow and the paths sparse. The third bit of luck was that we got to see a kangaroo joey tucked gently into its mother’s pouch.

The “Birthday Dinner” is a little like being the last kid standing in Wonka’s factory: you get to decide where you want to go. Although we’d only been out of the U.S. for a few days, we’d been without Mom’s awesome cooking for a long time. Asher, in a surge of visceral nostalgia, asked Angela to make him her famous bacon cheeseburgers. It shouldn’t come as a surprise that finding gastronomically accurate American ingredients is a challenge. Ground beef is usually the easiest; it’s the buns and bacon and ketchup that are nearly impossible, as they are attuned to local tastes. Fortunately Aussies are our first cousins in many ways and Angela rocked the birthday dinner…Asher was a happily sated 10-year-old.

HUNTING FOR WILDLIFE IN THE CAPITAL CITY

We had a deadline to visit a long-time friend and her family in Canberra at 3:15p. Packing up the remnants of four days on the move (a scattershot of clothing, electronics and food) put us out the door late, but we made up the time.

Guests of Canberra for less than 24 hours, we made the most of that time. We visited a science museum, walked around the Old Parliament building and enjoyed a snack in front of the space-age new Parliament House, built in 1988. The Canberra boulevards and traffic circles are so perfectly manicured and landscaped, and the avenues so straight, the town feels like something Walt Disney would have proclaimed to be the Capital of the Future. And perhaps, it is. 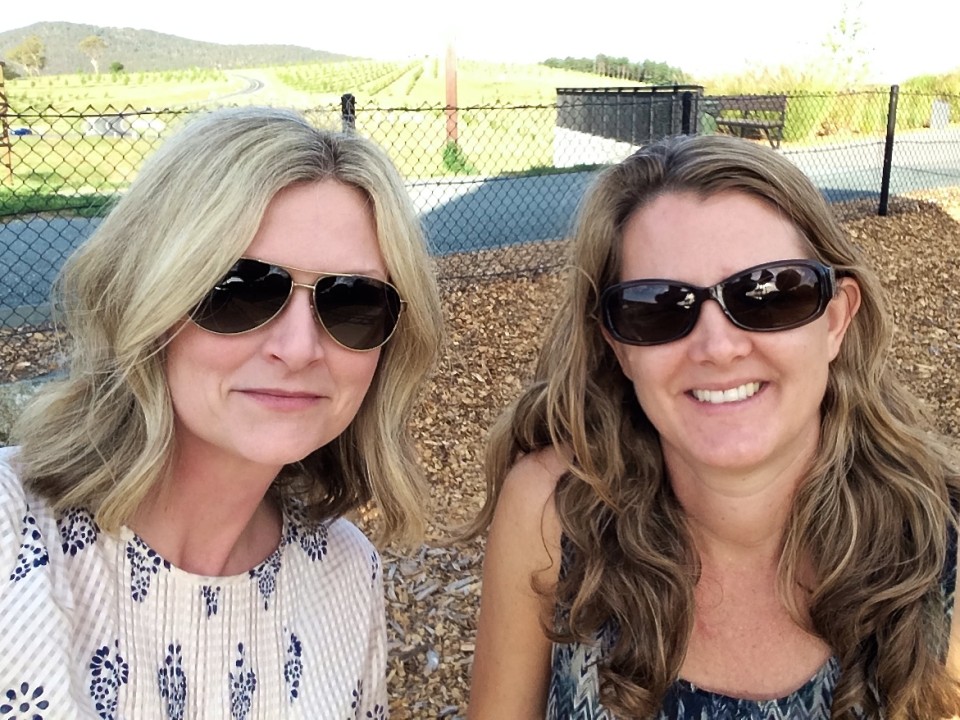 We met up with Juanita and her kids for the official tour and then enjoyed a sunset picnic at the top of the National Arboretum Canberra among the Himalayan Cedar Grove. Afterwards we drove down to the lake for pavlova, an original antipodean cake treat, while the kids watched for bats and ring-tailed possums in the park.

Canberra doesn’t typically make the list of “must-sees” in Australia, and that’s unfortunate. It is a lovely city.