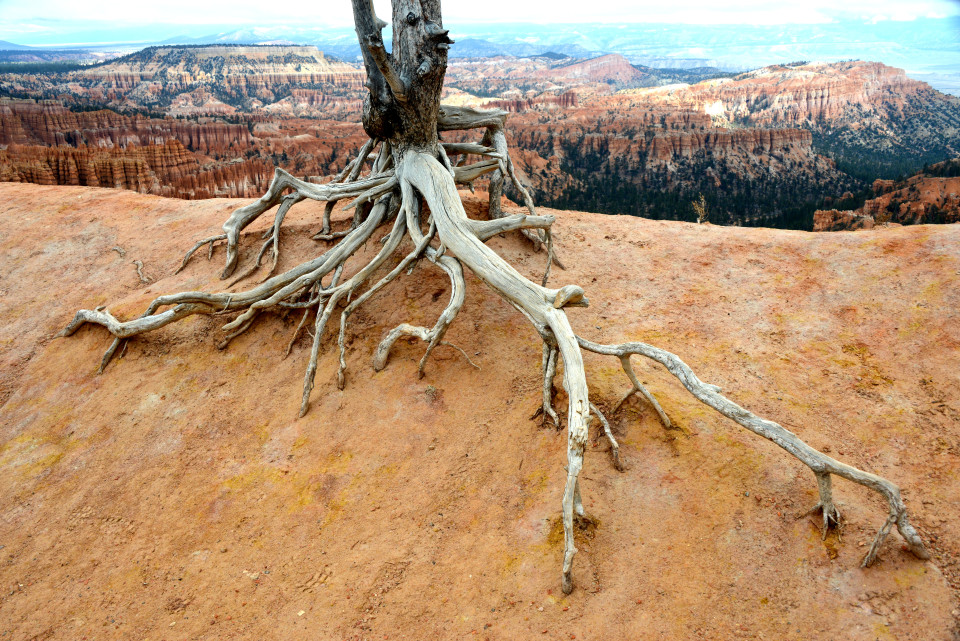 We were on a mission to travel more than three thousand miles across the U.S. between Thanksgiving and New Year’s. The trip would take us through rough terrain and crazy weather in hopes of maximizing time with family and friends. The original plan was to visit loved ones for the holidays then play snowbirds in January, heading south to relax, catch up on roadschooling and enjoy some warm sunshine. Best laid plans.

Our time in the Bay Area was spent tending to matters that had accumulated while we were on the road. We all had doctor and dentist appointments, Ronan had a martial arts test, we got a start on Christmas shopping and everyone spent time with sorely missed friends.

We didn’t have any firm commitments until mid-December, but we had a lot of ground to cover. We spent Thanksgiving in the Bay Area then headed out after the holiday weekend, making it to Bakersfield by nightfall, where camped in the middle of an orange grove. The following day was my birthday, which we celebrated at a Black Bear Diner in St. George Utah after driving more than 450 miles – including a “don’t blink or you’ll miss it” drive down the Vegas Strip (all 53’ of Airstream and Ford Super Duty – who knew you could still turn heads in Vegas?). 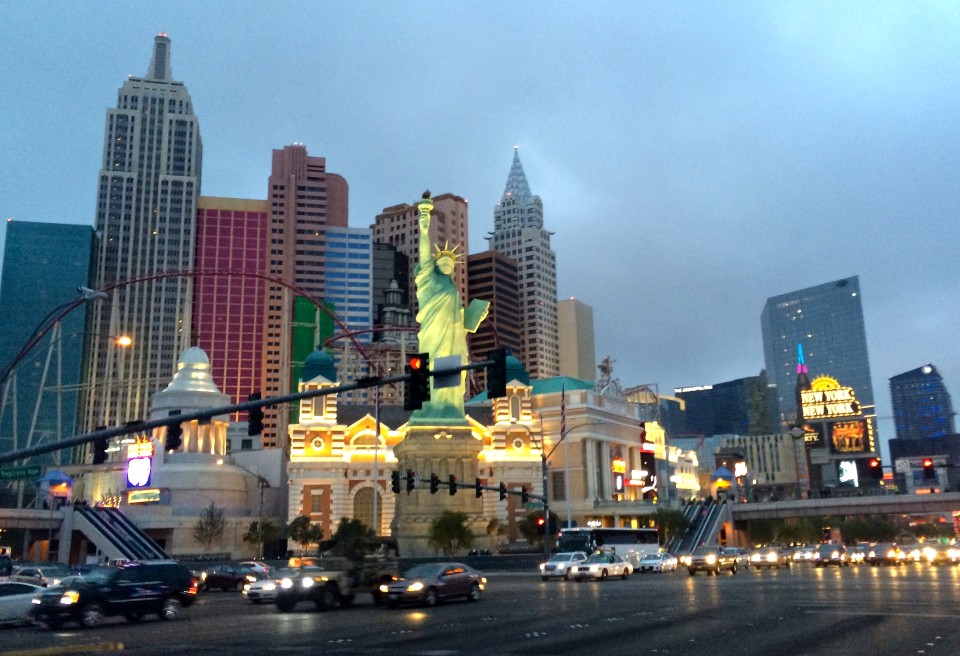 Over the past few years, a combination of business and leisure travel has given our family an opportunity to see much that Utah offers – from Park City to Moab – and it’s become one of our favorite places in the US.

As we traversed it this time, we visited four national parks – Zion, Bryce Canyon, Arches and Canyonlands – over two weeks. In Zion, we saw a large herd of bighorn sheep and later walked as deep into the Narrows trail as we could go without wetsuits. We took a rough gravel road around the of the canyon’s western rim and even traversed a washed-out section of the high Canyon Overlook trail. It was gorgeous in winter and must be equally so in summer, but the lack of crowds and cool temperatures made this visit particularly sweet. 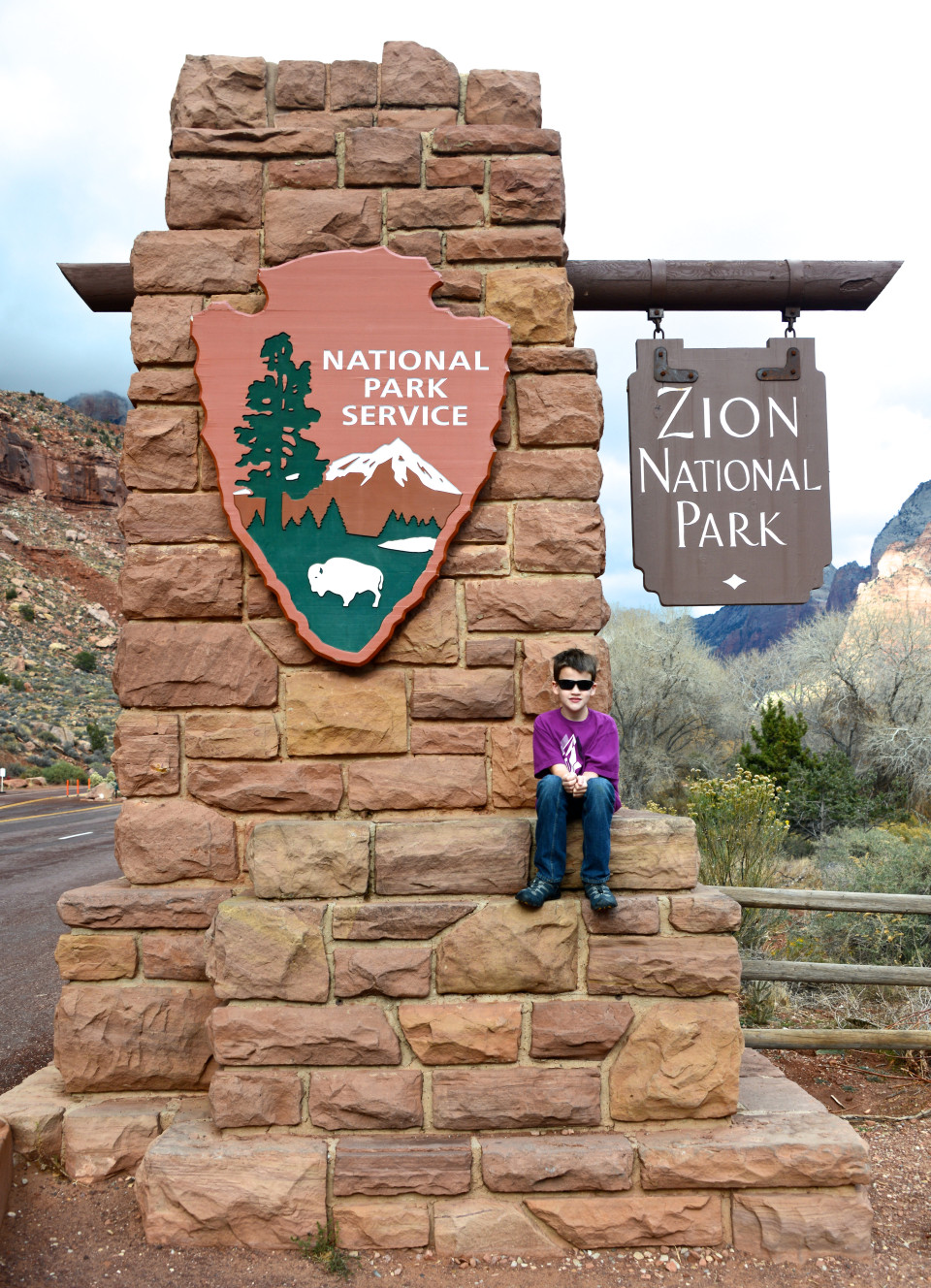 Our brief visit to Bryce Canyon, which was more like an extended rest stop on our way to Moab, gave us an opportunity to see the unique chess-piece rock formations called hoodoos that coat its massive geologic bowl. Sandstone rooks and bishops line up tightly along the deep canyon floor. A light snow fell as we reached an altitude of over 8000ft at the end of the park road.

We stayed longer in Moab, giving us a few days to rest from the hard driving and a chance to pause and see which way the weather would guide us toward Missouri – north across Colorado and Kansas, or south across New Mexico, Texas and Oklahoma.

I’d visited Arches National Park in both summer and winter. Although the cooler weather and shorter days make winter exploration more challenging, the colors of the rocks and that paucity of tourists made it the better season. Timber loved Moab too, or at least the dog park in Moab, where he made new friends and stretched his legs on several occasions. 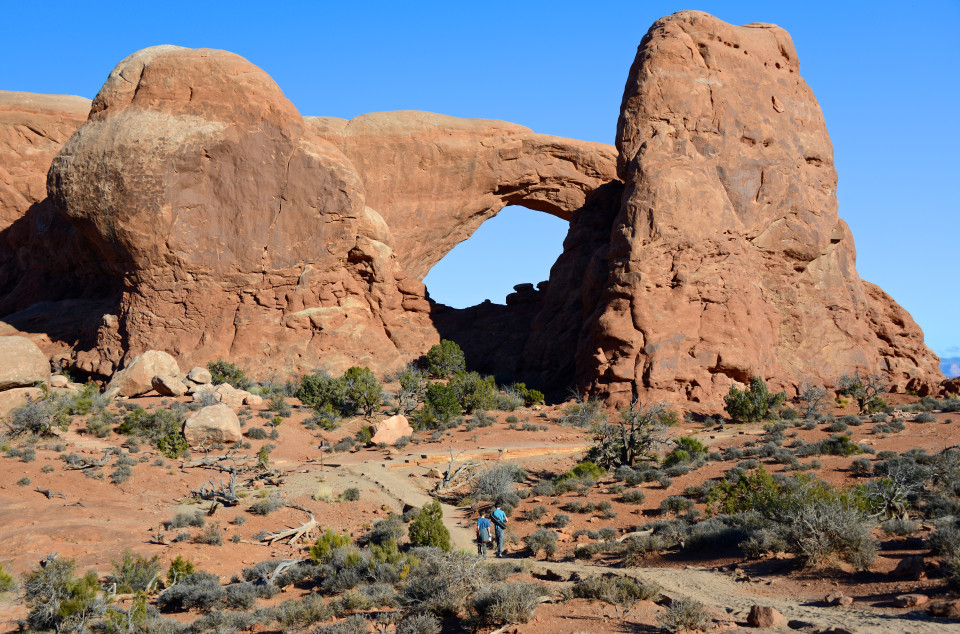 It was cold and windy the day we visited Canyonlands National Park, which mostly kept us inside the truck. When we did brave the precarious overlooks, the views were exhilarating and refreshingly devoid of human imprint.

Back in Moab a final weather check pointed us south through Albuquerque and Oklahoma City on our way to Missouri.

We stopped in my hometown of Carthage, Missouri for nearly a week to visit Grammy Iris. Each morning, Asher and I woke early to join my mother for breakfast somewhere in town, and every evening we’d all go to one of the local restaurants I’d missed – the Carthage Deli, the Red Onion or Chicken Mary’s. Sadly my favorite pizza place – Pizza by Stout – had been wiped out by the Joplin tornado a few years earlier. It was nice to have some extra, low-key time with my mom and we all had a great visit. 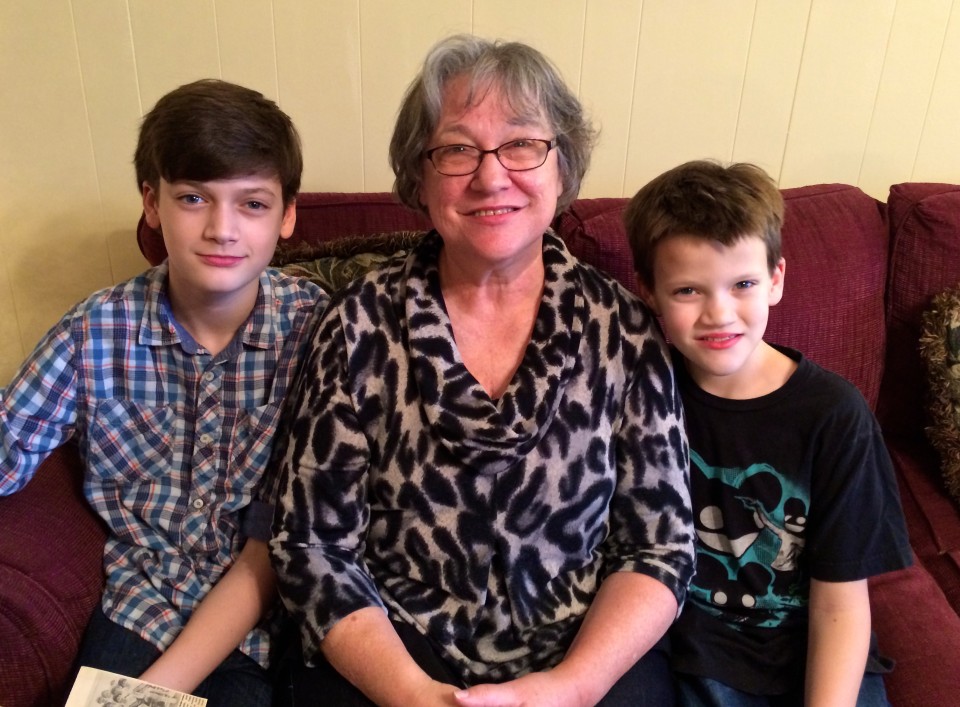 Speaking of pizza, in Columbia we enjoyed some much-beloved Shakespeare’s then explored the Mizzou campus with the boys. The next night we met up with our friends Kevin and Dawn and their two kids Brenna and Colin at the Heidelberg Restaurant, where I’d bartended in college.

We headed east a couple of hours to St. Charles, where Angela went to high school. There we saw some more friends from college, Sam and Chris, with the boys thoroughly enjoying Chris’ famous sense of humor. We serendipitously crossed paths with our good friends Steve and Susie and their daughters Anna and Sara, who were in town from Chicago to see family for the holidays. We met for lunch at Lewis & Clark’s, where Angela worked in high school, and then strolled around a very crowded St. Charles old town.

That night we received news that Angela’s 90-year-old grandma had been taken to the hospital and subsequently diagnosed with a terminal illness. We headed toward Cincinnati early, turning a two-day drive into one long, melancholy one. Over the holidays, Angela and her family ran loops to hospice, and Christmas was a more muted affair. It was a tough and sad time, but remarkable in that – with no school or work routines to return to – we had the rare opportunity to cancel other plans and stay in Ohio for over six weeks. Angela felt lucky to spend a lot of extra time with her grandma, and was able to be there for her funeral services in early February. On a happier note, the boys got to bask in their grandparents’ attention (and spoiling) for the extra time, too. 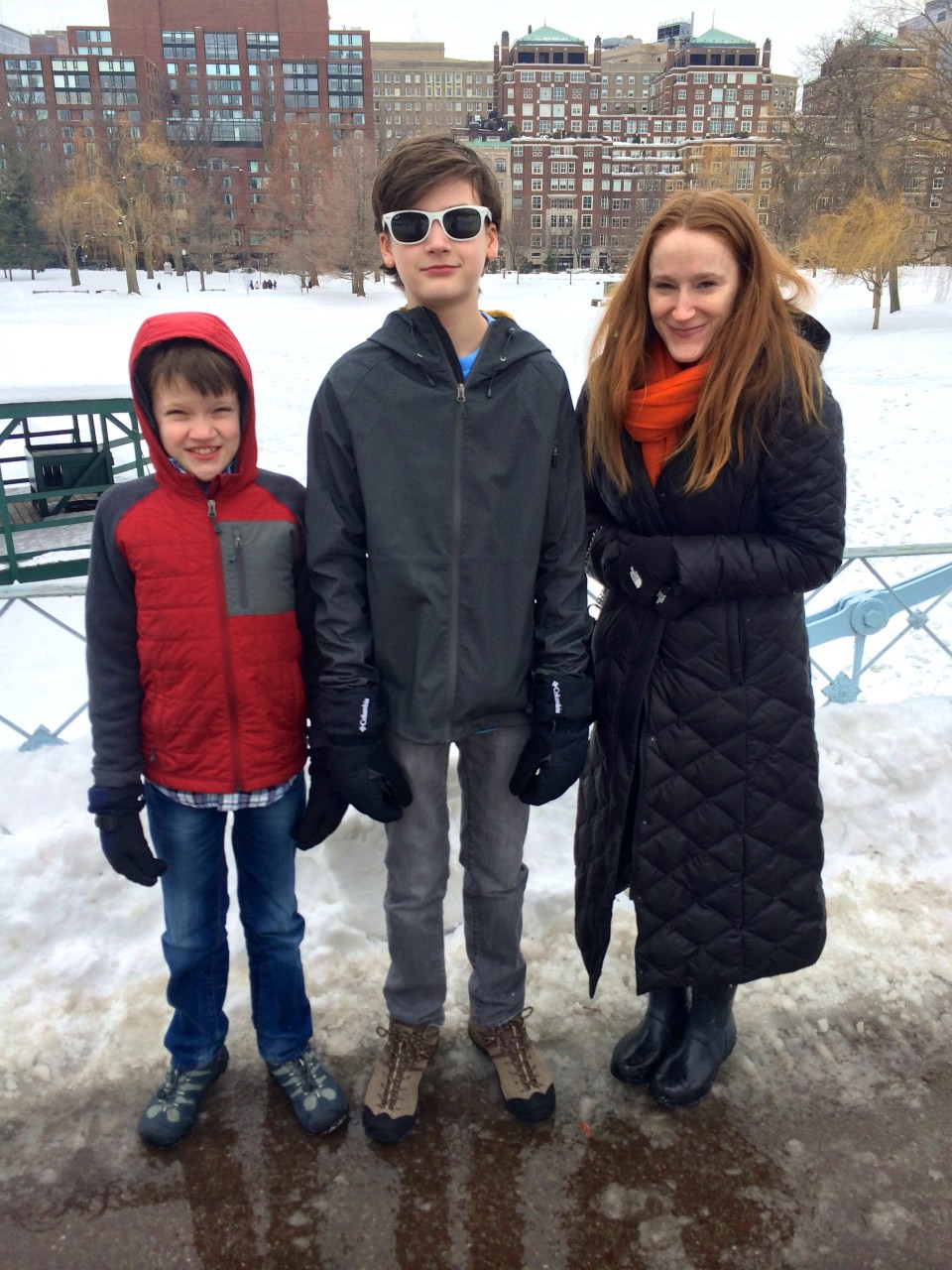 The final leg of our cross-country journey would take us to Boston to see my sister Alyssa. We stopped in Connecticut along the way and had dinner with our friends Justin and Stephanie and their kids Charlie and Anders. We were lucky to make it there at all, with a northeast blizzard causing road closures all along our path. By the time we got to Boston, the snow in Alyssa’s yard was over five feet deep and we spent much of the visit battling the elements. Timber, however, who would be staying with Alyssa while we were out of the country, was in heaven playing in the snowpiles with his dog cousins. It was quite clear he wouldn’t miss us at all.