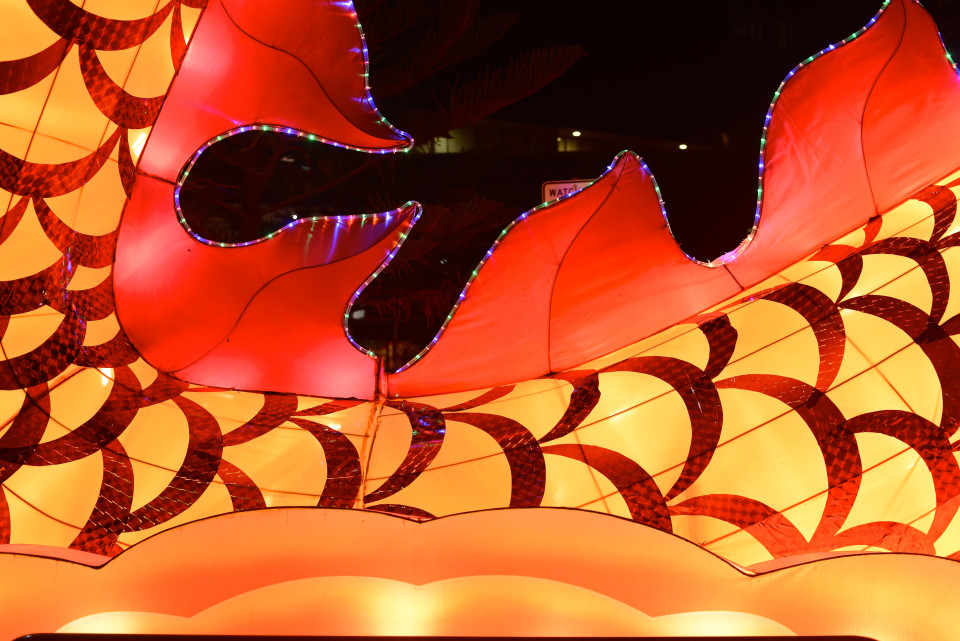 Travel days aren’t all bad. An eight-hour drive or 12-hour flight can be uneventful and even pleasant. The day we drove from Canberra to Melbourne was NOT one of those days. The long, straight road with the hot summer sun pounding the right side of my face all day wore on me. The family was unsettled and tired, the food options along the way were miserable and the GPS seemed to talk too much. Four-hundred ten miles – six-hundred sixty kilometers – never seemed so long. 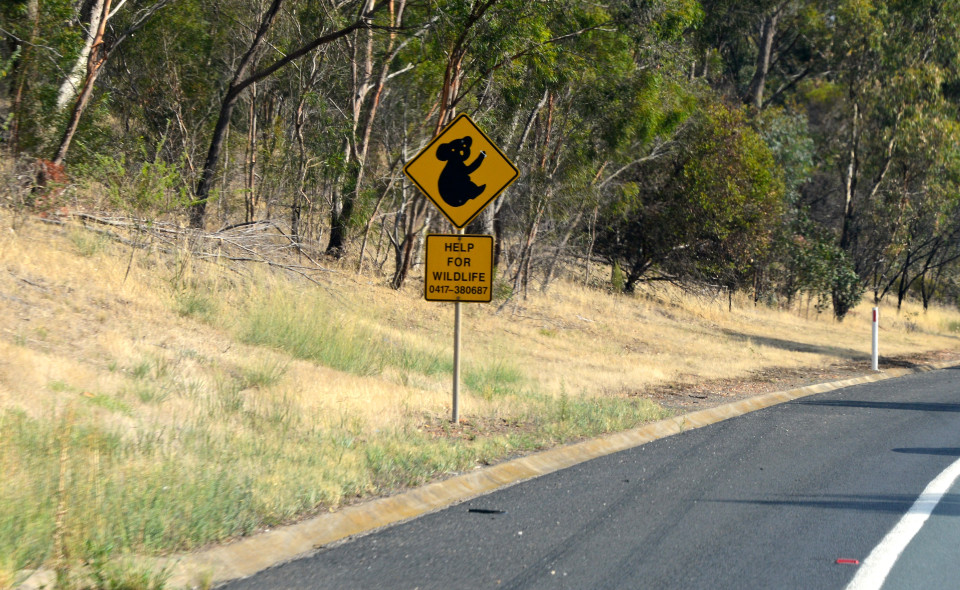 CHEERING FOR INDIA AT THE CRICKET WORLD CUP

Our time in Australia coincided with the 2015 ICC Cricket World Cup, which is held every four years. We didn’t understand anything about the sport and the World Cup was constantly on TVs in restaurants and pubs, so we wanted to learn more.

What better way to study the game than to attend one of the premier matches between two of the best teams in the world – India v. South Africa? India, by the way, is the reigning champion, having taken the Cup back in 2011. I purchased tickets for the boys and me to see a match at the famed Melbourne Cricket Grounds (MCG), a stadium that seats more than 100,000 and is regarded as the finest cricket ground in the world. It was extremely hot and humid in “the G,” but it was exciting to be surrounded by nearly 90,000 fervent fans (80% of whom wore India gear or waved its vibrant flag). 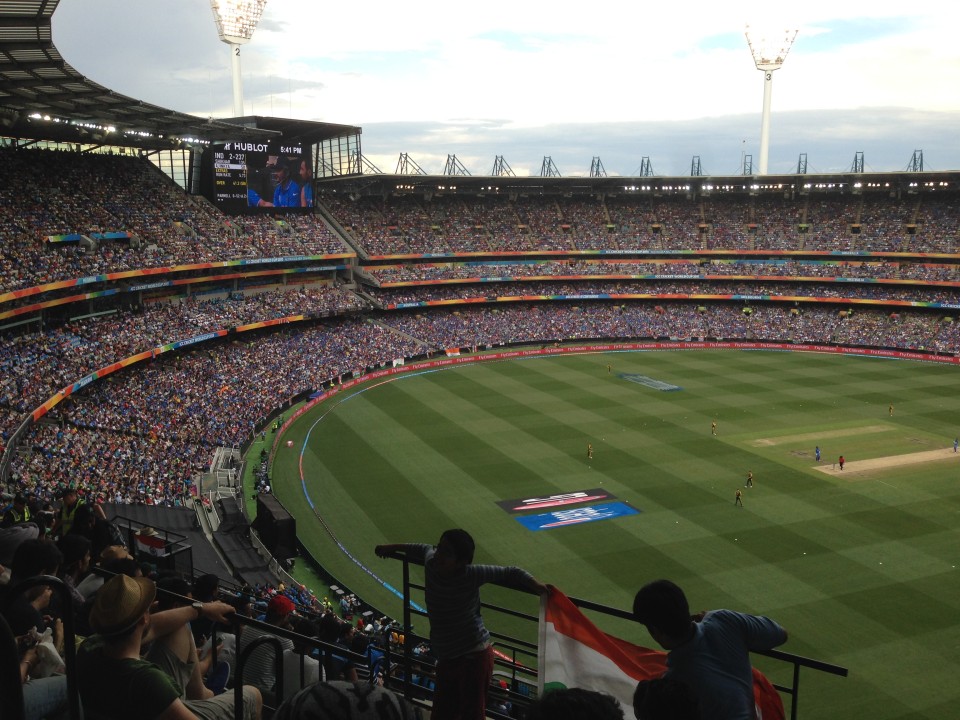 Rishi, a good friend of mine from the Bay Area, is a huge cricket fan, so I thought of him when we got our tickets; it was India (his home nation) and it was the World Cup. No one else I knew would care a bit that we were attending. I texted him to let him know that we’d be rooting for India. What section are you in? he responded. Q40. I’m in Q24! he said, let’s meet at the break. After India’s 50 overs were finished, the boys and I walked to the other side of the stadium to catch up with Rishi. He’d flown in from San Francisco with his wife to tour Australia and attend several of the World Cup matches. It was great to see him and the boys and I have a newfound love for cricket.

By the way, India won the match.

The weather was cool and damp following a night of thunderstorms. Joined by Juanita, we headed up to the Dandenongs (Dandenong Ranges National Park) east of Melbourne. The area is plenty touristy with lots of B&Bs, antique shops and cute cafes, but it’s also plenty fun for serious hikers and campers. We stopped for a brief lunch then entered the park with the intention of climbing the 1,000 Steps.

The weather wasn’t cooperating as the rain turned to violent thunderstorms, so we settled for a more moderate trail. It kept us close to the car and lower on the mountain. We had just rounded the loop when the deluge started, so we paused under a small pavilion in a glade of eucalyptus and mountain ash. What do you think, guys? I asked to gauge the willingness to continue. Angela was in. Juanita was in. The boys…hesitant. We waited until the storm passed before climbing to the highest part of the trail.

The 1,000 Steps Trail is also known as the Kokoda Track Memorial and commemorates the Australian troops who fought in the World War II Papua New-Guinea campaign. The name of the trail (or track, as the Aussies call them) was poorly chosen for parents trying to cajole their kids into a little walk. I told the boys it wasn’t likely to be 1,000 steps in reality; the name was probably representative of some other numerical significance – like 1,000 men or 1,000 days. I was wrong. We saw many locals who hike the steep 5k track for a vigorous workout.

A thick fog settled in the canyon so we couldn’t see much, but the outlines of the tree ferns were striking in the steamy rainforest, and the insect noises and birdsong were so different from what we know. Plus we made it to the top successfully.

We had a great time with Juanita and enjoyed her cultural insights; it was sad to see her leave.

We’ve driven many great roads. The Pacific Coast Highway in California (aka PCH). Lake Shore Drive in Chicago (aka LSD). And I-75 in Florida (aka Alligator Alley). In our search of a koala in the wild and to allow our muscles a chance to repair from the previous day’s hike in Ferntree Gully, we set out to explore Australia’s Great Ocean Road (aka GOR). Actually, I have no idea whether anyone has ever referred to it as GOR, but it might stick. 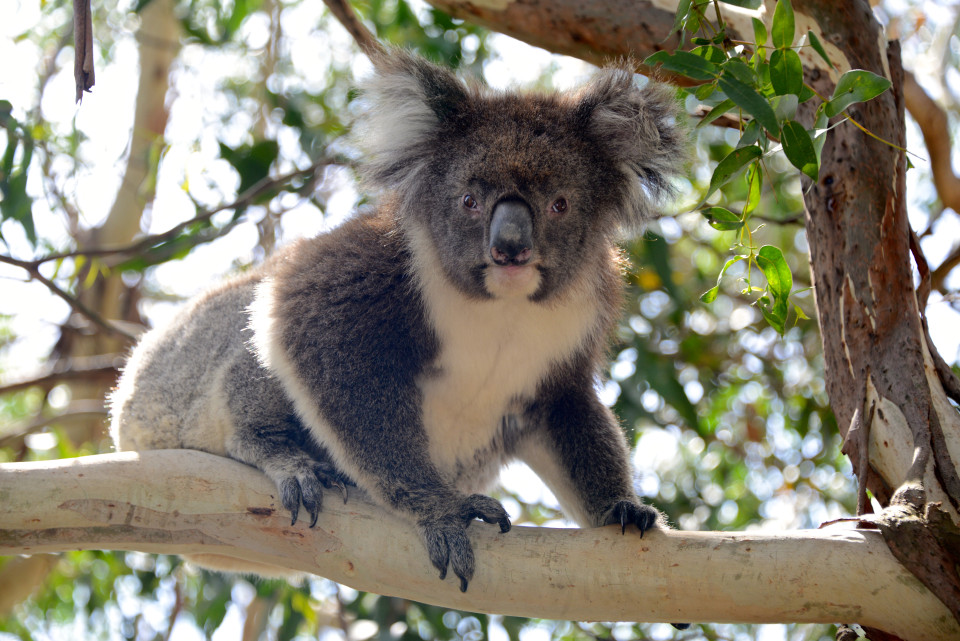 Along the way we stopped for lunch at “The Bottle of Milk” in Lorne; a restaurant that wowed us in two ways. First, it was arguably one of the best burgers anywhere. Right up there with The Bird in Jackson, Wyoming, according to Ronan. Angela’s veggie burger was one of the best ever. Unfortunately the café had one of the rudest staffs anywhere in the world. The employees were machine-like in their efficiency – plates slammed down on the tables with robotic frowns, complete with a side of extra glare if you made any request.

We turned onto Grey River Road near the mouth of the Kennett River, where it flows into the Great Australian Bight. The Koala Café there sold birdseed to draw the region’s many parrots down from the towering trees. Before we even left the parking lot, we found five koalas lounging in a smallish eucalyptus grove at the base of the hill.

As we drove up the gravel road, Angela and the boys counted koalas. We got a bit lost. It would have been easy to turn around but the drive was too fun. It ended up being the best part of the day, and we got to see the massive mountain ash and gigantic tree ferns. Soon we crested the mountain then descended into Skenes Creek and headed back to Melbourne.

We had an early morning flight to Cairns, where we rented a car for the drive to Port Douglas in tropical North Queensland. The area is a popular jumping off point for rainforest hiking and snorkeling and diving on the Great Barrier Reef (GBR). By the time we arrived at the apartment, it was 95 degrees.

The tour bus picked us up just as the sun was rising above the palms and dropped us at the marina for our snorkeling trip on the GBR. 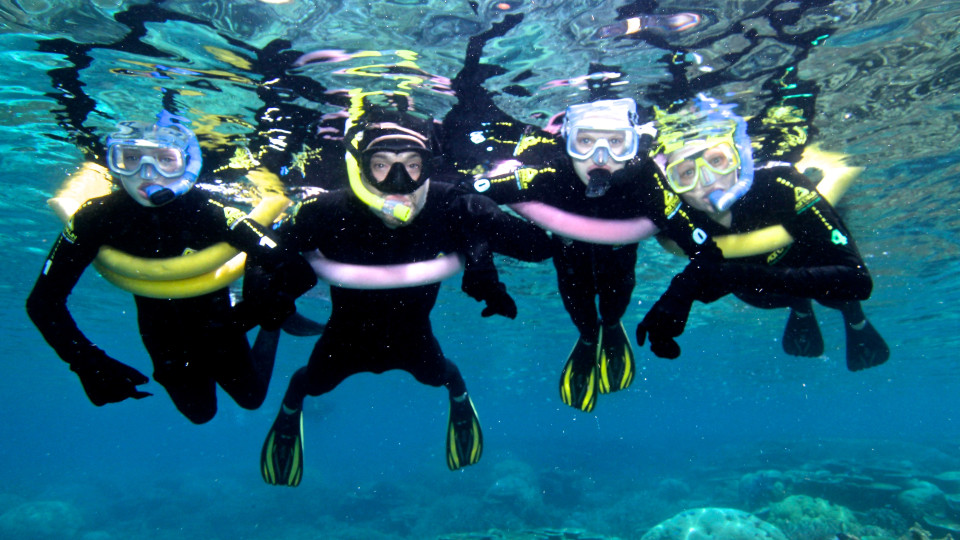 A family that snorkels together.

We were a little wary to be visiting such a rich ecological biome. After all, the Batt Reef, which we crossed on our journey, was where Steve Irwin, “The Crocodile Hunter,” was killed by a stingray in 2006. In addition to the stingrays, it is an area known for great white sharks and dangerous species of stinging corals, fish, sea snakes and jellies. It took us an hour and a half to reach Opal Reef, roughly 35 miles off shore. The day was perfect – 80 degrees with little wind and glassy water. After a short safety briefing by the crew, we donned our stinger suits and snorkel gear and jumped in the ocean.

We’ve snorkeled in Hawaii and Thailand, but nothing compared to the Reef. It was brimming with life below the water and above. We spotted countless angelfish, clown fish, unicorn fish, sea cucumbers, sea stars, anemones and corals in the water. Among our favorites was a giant Maori Wrasse known locally as “Angus” who was as big as Asher, giant clams with their pulsing, iridescent bodies and a school of trumpet fish that shifted with the current. When moving between dive locations we saw thousands of flying fish gliding an inch above the swells, and were followed by a pod of dolphins on our way back to shore. 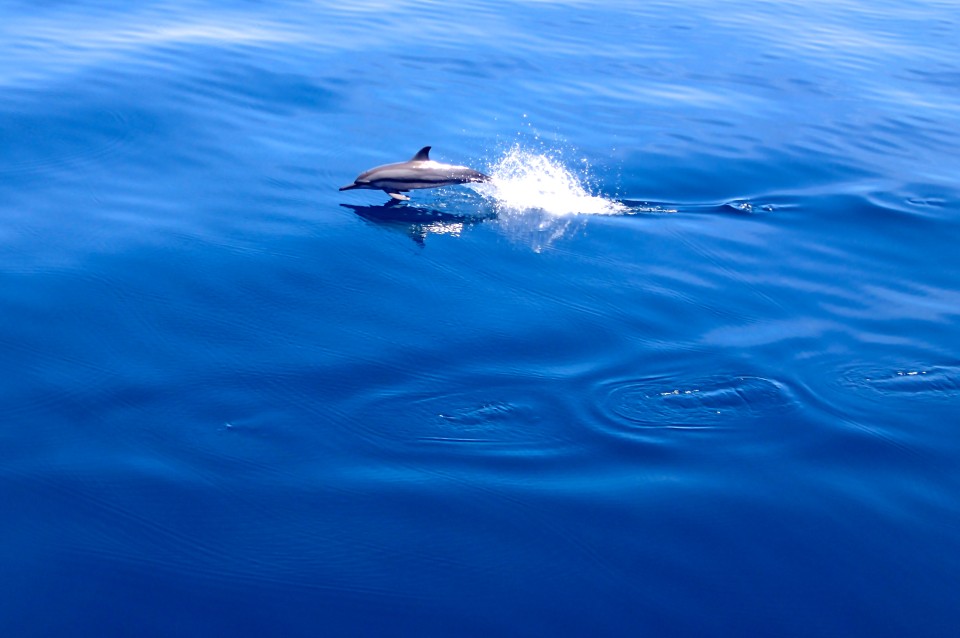 Dolphin plays along side the boat.

The reef talked, too…in a way. As we floated precariously close to hundreds of parrotfish nibbling on the corals, we could hear the muted static of their grazing.

Despite both our fear and curiosity, we didn’t see anything that dangerous. No sharks. No rays. Even the jellyfish off the side of the boat during our journey back to port were not a deadly variety.

In total, we spent a little over three hours in the water and about five in the boat gliding over the GBR. It was one of our all time favorite travel experiences.

HUNTING CASSOWARIES IN THE RAINFOREST

Known as the Wet Tropics of Queensland, the Daintree Rainforest is a part of the enormous ecosystem that stretches for 450km along Australia’s northeast coast. A UNESCO World Heritage Site, Daintree’s entrance was only a few kilometers from Port Douglas and our target of Cape Tribulation was where the paved road ends. The intersection of the Wet Tropics and Great Barrier Reef is the only place in the world where two UNESCO World Heritage Sites meet. 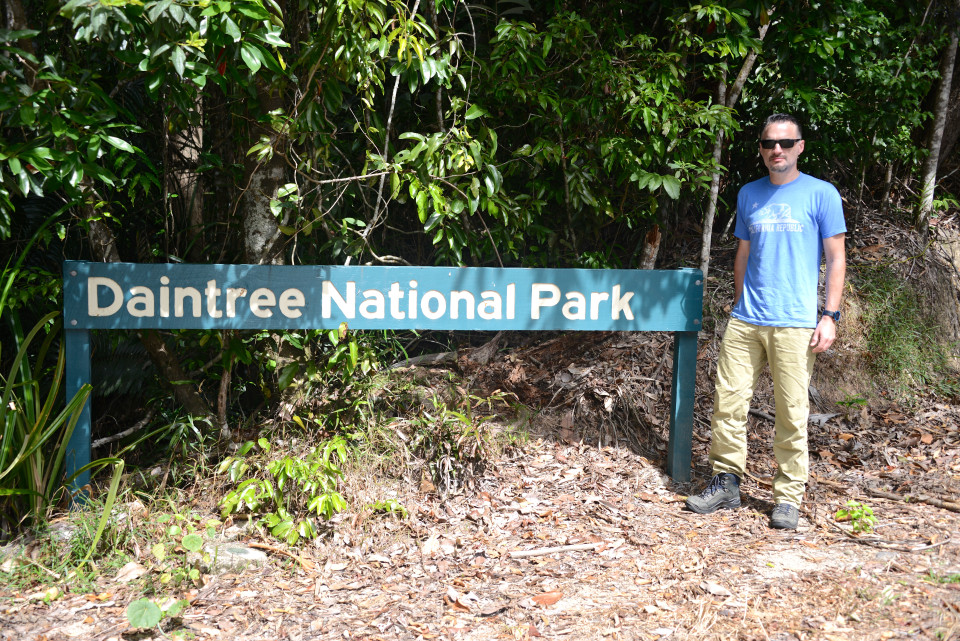 There are so many deadly creatures in Australia. We were constantly on the lookout for spider webs or a scaled tail sticking out of the bush. There were ticks that could cause paralysis and scorpions, leeches and hairy caterpillars that could inflect loads of pain, but we were ok as long as we didn’t get too adventurous. The creature we were most on guard for (but hoping to see) was the dinosaur-like cassowary – the most dangerous bird on earth.

After passing by sugar cane fields, crossing the Daintree River by ferry and roving through the dense green rainforest, we arrived at Cape Trib and hiked along a short track to the deserted beach. Asher and I found monitor lizard tracks under the mangrove roots at the edge of the forest and Angela spotted several reef sharks hunting for food in the sea shallows. We were cautioned not to walk in the water for fear of box jellyfish (the most poisonous jellyfish in the world), so we watched from the sand. Tiny crabs scattered when we got too close to their holes, intricately decorated with thousands of pea-sized sand spirals. 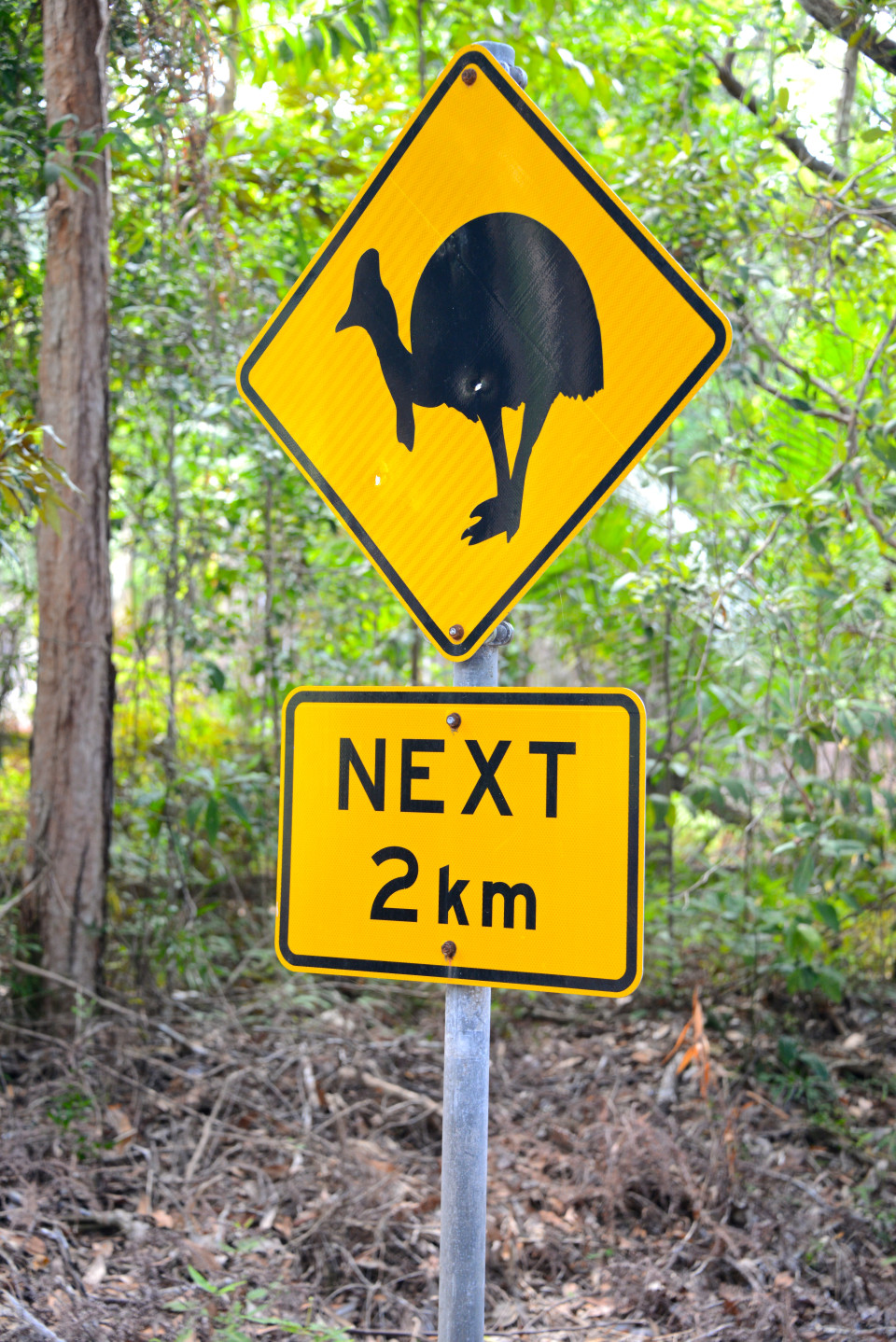 Despite our best attempts, we never saw a cassowary. We did see some exotic butterflies and spook another monitor lizard lying in the sun along one of the hiking trails. I nearly walked into the web of a leggy black spider bigger than my hand, but Angela found one that could have eaten a bird.

We closed our last night in Australia with a cool swim and relaxing dinner. The next morning we would fly to New Zealand.