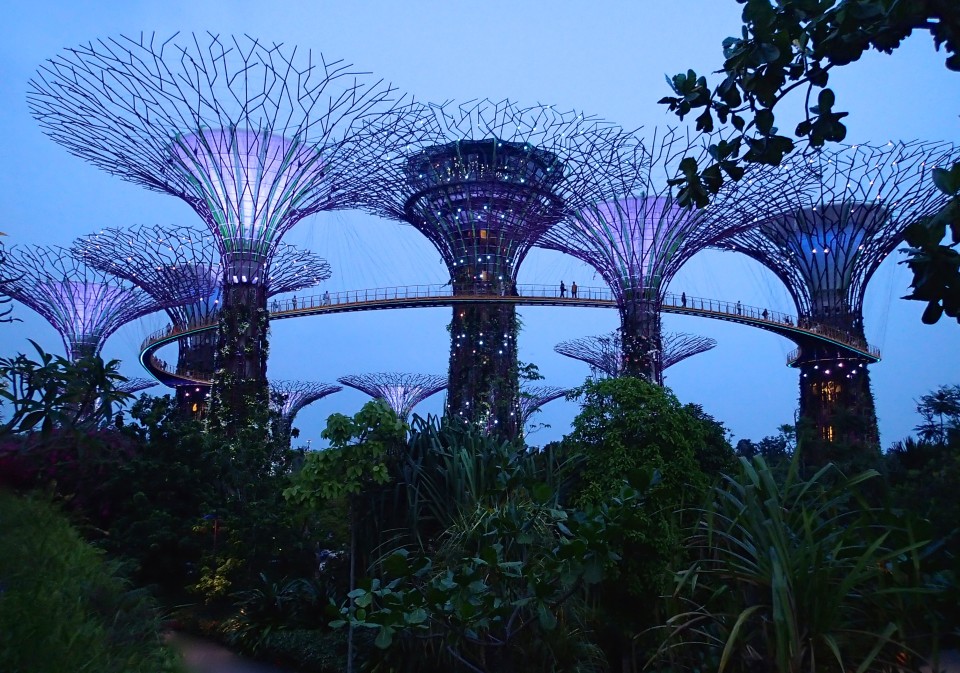 Singaporeans are proud of their country and most are very reverential of its founder, Lee Kuan Yew (LKY). Throughout our time there we were reminded of his importance not only to this city-state, but also to the world; indeed we found ourselves impressed with what he’d accomplished while also acknowledging what it has cost.

Singapore is one of the cleanest and most orderly cities in the world. Traffic moves smoothly. Graffiti is non-existent. There is no blackened gum on the sidewalks. Well, no gum at all. Its citizens all have jobs and homes. It is a city of destiny – confident and heroic. The dark side, which we heard about from the locals, was the heavy restrictions on behaviors and the severe penalties for little things. Criticizing the government is a major no-no. Jaywalking can get you actual jail time as well as a significant fine, and the penalties for chewing gum have become infamous. However, the city welcomed us with warmth.

THE HEAT WAS ON

Our first full day in Singapore was focused on exploring the city, albeit a little addle-brained. We were still tired from our last week in New Zealand, and the 10-hour flight the previous day had twisted up our internal clocks.

At one degree north latitude, Singapore is well, equatorial, with oppressive heat and tropical humidity. Our hotel delivered the bad news that it was 97 degrees outside, but our weather app indicated that the RealFeel® Index was 109. We dressed in our coolest clothes to wander the Singapore Botanic Gardens. It was a Sunday, so there were many family picnics sheltering in the shade and sweat-glistened runners trying to get in their exercise before it got even hotter. The park consisted of groves of bamboo, tree ferns, palms, lotus…and clouded monitor lizards. Instead of squirrels or pigeons, this park’s ‘apex pest’ was a three-foot long lizard who sat quietly and nearly invisibly in the leaves until disturbed, when it would scramble loudly to and up the nearest tree. Lesson learned – stick to the paths. 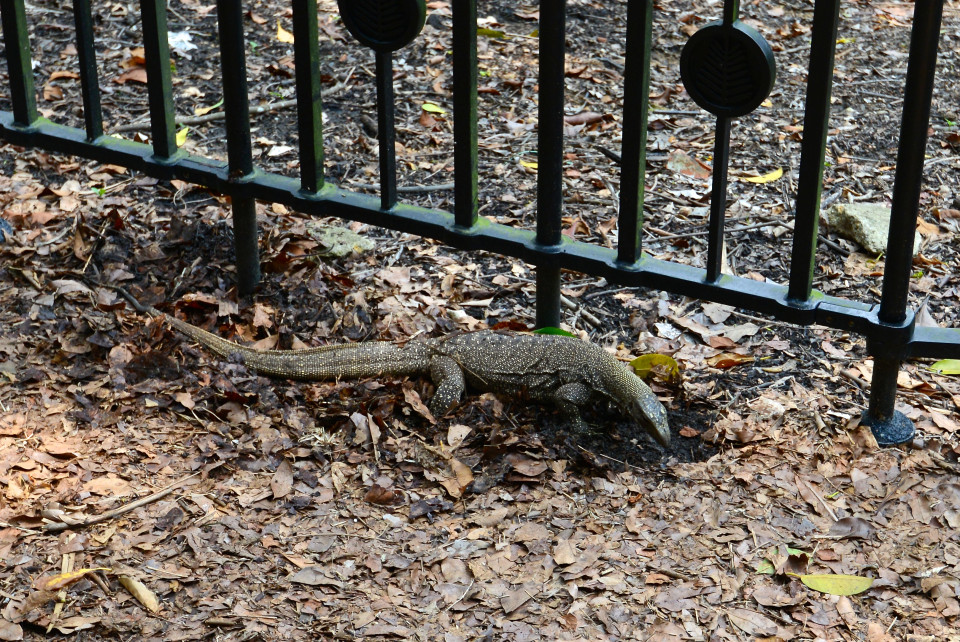 In the heart of the Botanic Garden is the world famous National Orchid Garden, where we lingered for an unusually long time given the heat. Housing one of the world’s largest orchid breeding facilities, there are over 1,000 orchid species and more than 2,000 hybrids in the garden. It also has a large section dedicated to celebrity-named plants. We were fortunate enough to see the Laura Bush. No lie.

We grabbed a tour bus at the Nassim Gate and looped the city’s core, whose main artery is Orchard Road. We weren’t interested in shopping, but the road is a dream to anyone looking to spend money on high-end designer clothes and jewelry. We passed the historic Raffles Hotel, a colonial-style hotel built in 1887 that has borne witness to the incredible transformation of the city. It’s also where the famous Singapore Sling drink was invented. Further on we passed the Singapore Flyer, a giant Ferris wheel even bigger than the London Eye, and the famous “hotel with a boat on top,” Marina Bay Sands. 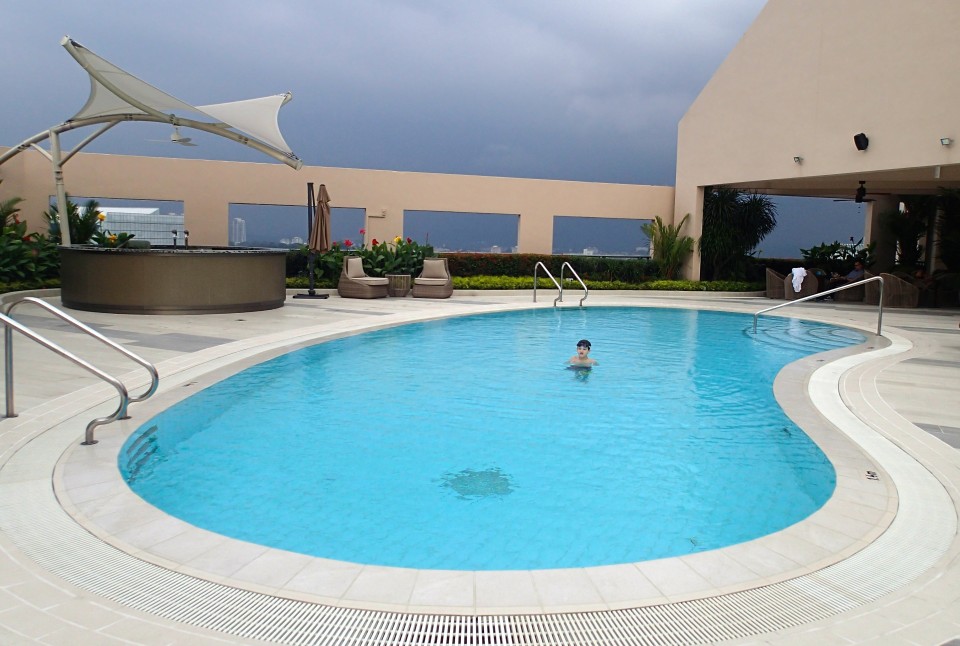 Needing to cool off, Asher and Angela hit the rooftop pool on the hotel’s 22nd floor. Unfortunately a massive thunderstorm crept toward us hurling lighting bolts into any tall structure it could. Three hundred feet in the air isn’t a good place to be during a tropical electrical storm, so we headed under cover.

Singapore woke to devastating news on March 23rd. After months of illness, their hero had passed during the night – Lee Kuan Yew was dead at 91.

The city was subdued and posters, banners and signs recognized the man “Lee Kuan Yew, 1923-2015.” He once said, “if nobody is afraid of me, I’m meaningless,” and proclaimed that he carried a figurative “sharp hatchet in his bag.” LKY would become one of the most beloved leaders in the world – especially surprising in a world where mistrust of people in power and those with strong opinions are often the most reviled. His death was a storm cloud over the mood of Singapore.

The next morning we grabbed a taxi from the hotel to Little India, one of the major ethnic areas of the city. As we passed the Presidential Palace, hundreds of reporters and thousands of Singaporeans were gathered on the sidewalks. True to their nature, they were orderly and stood in neat lines. We listened to local news reporters on the radio discussing the life of the man who had created a modern powerhouse from a muddy island with no natural resources. When we exited the taxi, our driver turned to us and said with a smile, “don’t let our mourning ruin your time in Singapore. Please enjoy yourself.” 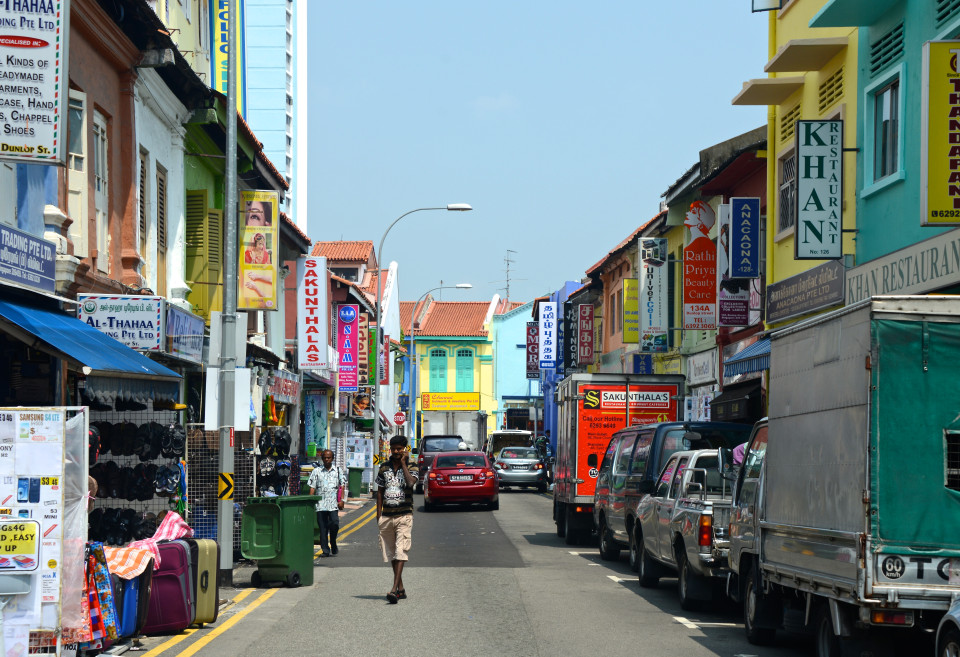 In Little India, we walked around in the stultifying heat, the sun directly overhead obliterating any slivers of shade along the edges of the streets. Angela and Asher stopped in the Sri Veerama Kaliamman, an ornately-roofed Hindu temple dedicated to the goddess Kali. Hundreds of Chinese school kids were being ushered through the temple on a field trip, while their teachers (wranglers) explained Indian culture to the students. We then walked through the markets and by the canopied shops selling everything from postcards to papadum, samosas to silk.

Back on the double-decker tourist bus we toured Arab Street and Chinatown too, but chose not to explore on foot in the sizzling afternoon sun.

VEGAS IN THE SKY

William Gibson called Singapore, “Disneyland with a death penalty,” but it felt more like Vegas than anything else. Nowhere embodied this more than the Marina Bay Sands, an architectural feat of cartoonish scale and the centerpiece of the Marina Bay development. The building cost over $8 billion and was built during the midst of the global economic crisis of 2008-2011. The Skypark on Level 57 looks like a curved barge and was our destination to have a drink and watch the sunset. The drink, a rail martini, cost $25 and the view was hazy, but we got to see what the hubbub was about and experience a bit of Vegas on the other side of the world. 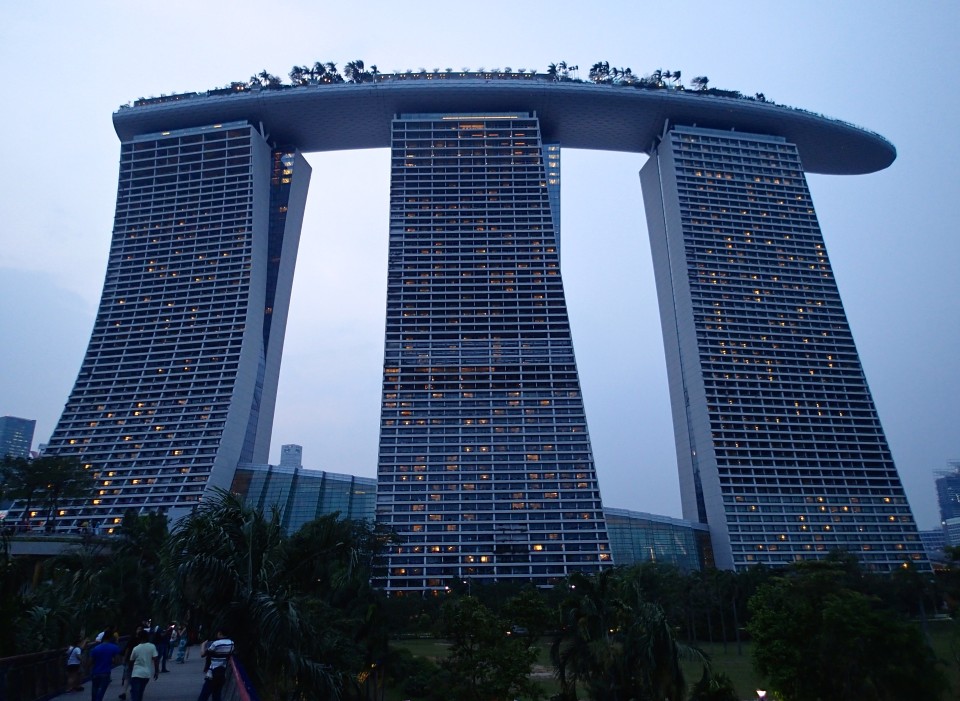 A QUEST FOR PERFECTION

Everything in Singapore was considered and done with evident striving for a balance of utility and aesthetic. The Marina Bay development was impressive, not just the hotel, but the office buildings, parks, lagoons and gardens. Broad avenues offered manicured lawns, flowering bushes and niwaki.

‘Even from my sickbed, even if you are going to lower me to the grave and I feel that something is going wrong, I will get up.’ – Lee Kuan Yew

Our final few hours were spent enjoying the pool and culinary gifts of the hotel. The next leg of our journeys would take us through the diametrical opposite of Singapore – Viet Nam, Laos and Cambodia. Places much older and a lot less ordered.