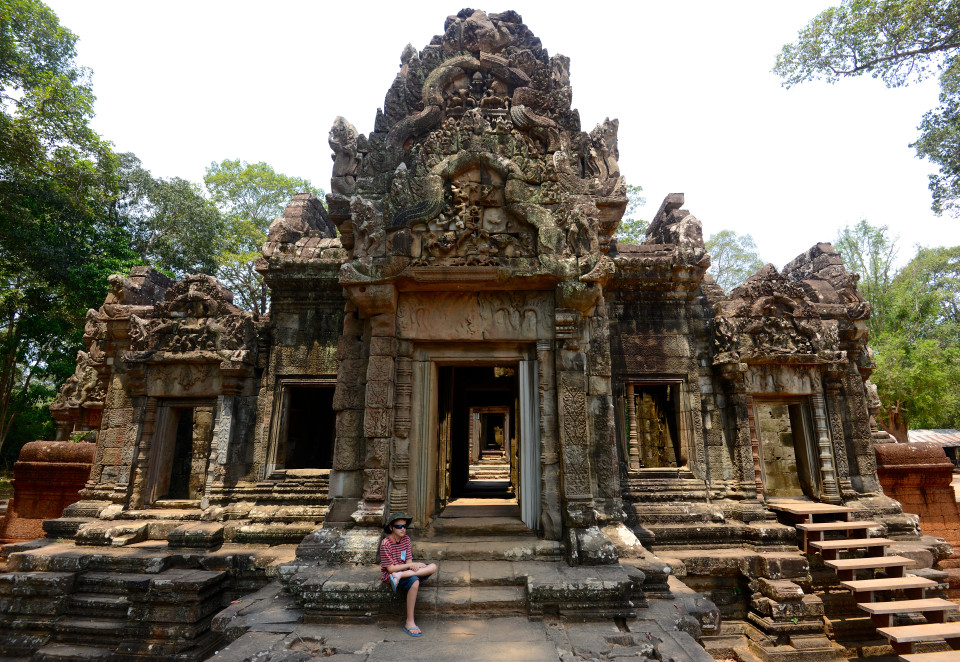 “Do you know about the linga?” our guide asked. We nodded. It was the tenth time he’d shared the story about their significance in the Angkor culture, but that didn’t stop him from telling us again. “The linga, the male sex organ,” he continued, “represented Shiva.” The carved stone phallus was worshipped as the creative force of life in the Khmer Empire. Water was poured over it to be blessed; it collected in the yoni, or basin, to be used in fertility rituals or medicine. Our guide, a moon faced man with lonely eyes, seemed to enjoy repeating the explanation. We smiled politely and played like it was new information.

It’s been almost 1,000 years since Vishnu (later Buddha) was first honored with a temple amidst the sultry forests and river plain. Yet the 400 square miles that house hundreds of Hindu and Buddhist temples are very much alive. Royal decree and the UNESCO World Heritage requirements limit the proximity of ‘homesteading’ by people and businesses inside the complex. But those who have lived here for generations are exempt, so it is a world where ramshackle huts on stilts coexist with intricate sandstone temples. 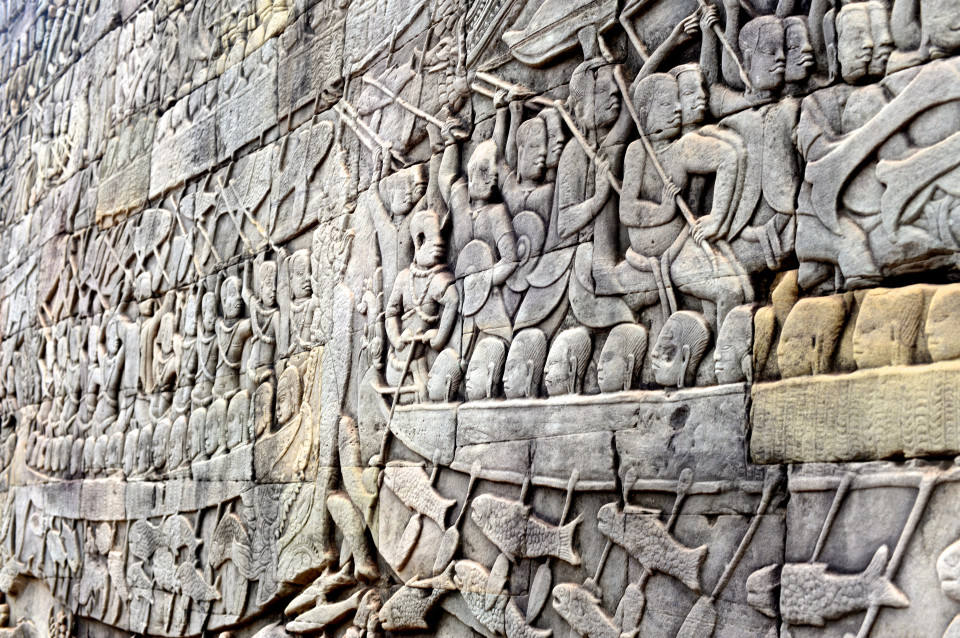 Bas-relief of the war with the chams.

The Khmer Empire, now known as Kampuchea to the local people and Cambodia to westerners, was an incredibly powerful Hindu-Buddhist realm built on the foundations of the preceding Funan and Chenla kingdoms. At its peak, the Khmer Empire included large swaths of modern day Laos, Thailand, Southern Vietnam and Cambodia. The Empire’s most significant achievement was the massive complex of Angkor.

At some point in the development of a great culture or society, there is a ‘manifest destiny’ period, where the expansion of wealth and art seems an inevitability. The Mongols, Romans, British and Persians all experienced long periods during which they dominated or influenced many millions of people across large swaths of territory. So too did the Khmers, with an economy, military and culture that affected all of SE Asia for over 600 years. While Europe was in the midst of the Middle Ages, Angkor was the largest urban complex in the world, with an estimated 1 million residents.

Despite the tremendous political upheavals Cambodia has experienced in the last 200 years and the self-inflicted damage of the genocidal horror committed by the Khmer Rouge nearly 40 years ago, there is a quiet strength in its people. They are as kind and generous as they are welcoming and proud.

PERHAPS WE STARTED OFF ON THE WRONG FOOT

Despite its impressive history, as far as first impressions go Cambodia was a mess. The Siem Reap International Airport had us meander across an active tarmac competing with aircraft, baggage carts, fuel trucks and vans ripping by at highway speeds. The visa application process was Orwellian; twenty officers at their stations, attired in full dress uniform with big hats, shiny badges and golden epaulets, looked down at us from risers, scrutinizing our every feature. At border control, the agents intentionally separated me from the family and then asked for a tip in exchange for the return of our passports. After we finally got our bags I discovered that several items had been stolen from my backpack, including a Father’s Day gift from my family.

Look, every country in the world deals with some level of corruption – but Cambodia is notorious. Transparency International says it’s one of the worst, sitting amongst such peers as Pakistan, North Korea and Libya. Laos, where we’d just flown from, is also considered a pretty murky place, so we weren’t entirely surprised. In both Cambodia and Laos, they say that the best jobs aren’t in medicine or engineering, but in government work. Any government work, in fact, because it’s that lucrative: the pay is consistent and generally good, you’re protected by the party and the opportunities for ‘bonuses’ are, well, many.

The deal is this: if you travel, you are a guest everywhere you go; and that means you are playing by someone else’s rules. You try to learn them; adopt them; and roll with it. Despite the tip request and my sentimental loss, no one was hurt, we weren’t in any real danger and being hustled isn’t personal. I paid for a story.

A QUEST TO BEAT THE HEAT FAILS MISERABLY

Siem Reap bears responsibility for protecting the great temples of Angkor and for hosting the world coming to visit them. It is a thrumming engine that powers local prosperity – guides, restaurants, markets, hotels and tuk-tuks. The contrast between the Angkor complex and this bustling city is huge, but diminishes each day as new construction projects – mainly resorts and shopping centers – move closer to the hallowed temples. 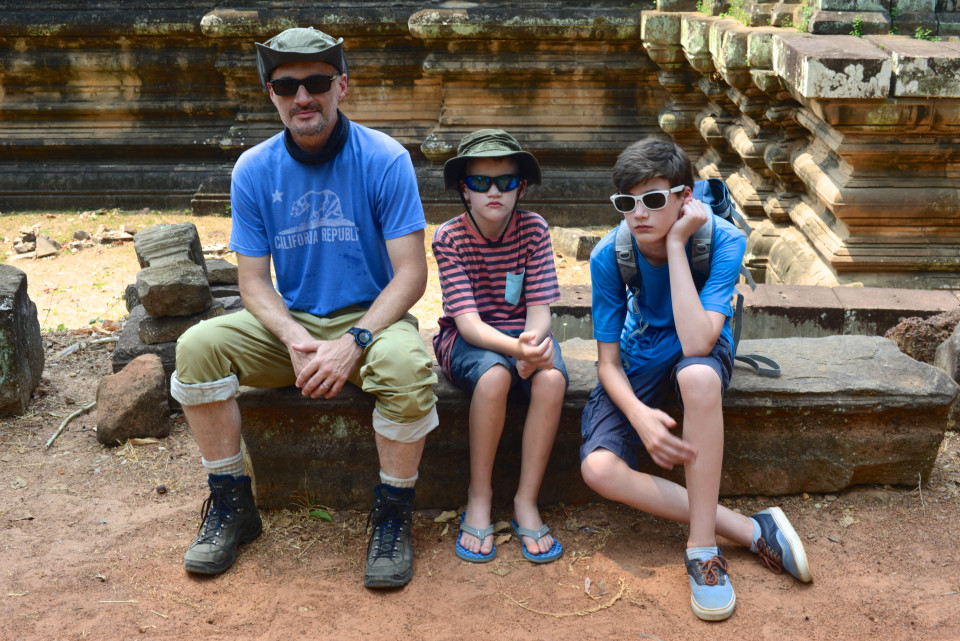 The trick to avoiding the crowds and sparing oneself from the unrelenting heat is to start the day at 6:00a. This runs opposite to the very fabric of my family, who prefer sleeping in and counting lunch as breakfast. But at 7:00a, the temperature was 85 degrees on its path to 105+ each afternoon. Heat is a universal damper on moods no matter who you are, but it absolutely pummels the spirits of this family. By 10:00a, we are in a race to supply enough water to offset what we’re losing. There’s no laughter when we are saturated by sweat and coated in a fine red dust.

It’s easy to be overwhelmed by the temples of Angkor. They are beautiful and they are everywhere. There are the main sites of Angkor Wat and Bayon, and hundreds of sundry ruins scattered under bramble and vine off the main roads. Giant tour buses with names like “Golden Times” or “Holiday Pleasures” loaded with Chinese vacationers congeal around entrances to the most famous spots. As tourists mill around confusedly, local kids cool off in 1000-year-old pools, men cast lines into ancient imperial moats and women stoop over charcoal fires. 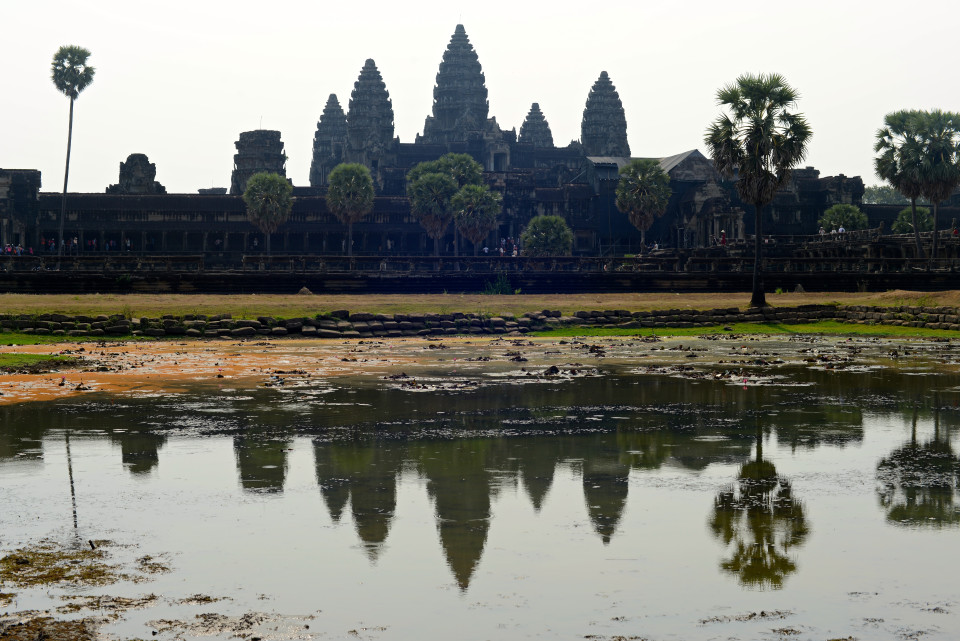 Over the course of three days, we enjoyed mostly unrestricted access to around 20 temples and sites. These are ruins you can touch and feel. We climbed the central tower of Angkor Wat and learned about the Khmer’s military achievements and daily life from the bas-reliefs at Bayon. We crossed the naga bridges and passed through the adorned gates of Angkor Thom. Later we squinted our eyes to see the subtle remains of reclining Buddha at Baphuon, where the pounding sun and monsoon rains have scoured the bricks to a shadowy outline 9m high by 170m long. Ronan and I climbed to the crumbling top of Phimeanakas and made an offering of incense we purchased from an old woman. She stood between us and bowed toward the east, squeezing Ronan’s hand and whispering blessings in Khmer.

There was the Bantãy Srĕi, or Citadel of Women, where the delicate and elaborate carvings in deep red sandstone rendered us speechless, each finding solace at different places. At Ta Prohm, the giant ficus trees have grown up and through so much of the temple that massive stones are entirely embedded in the trunks. We stood by the white bulls at Preah Ko while the temple’s maintenance crew sat in the shade of the forest, eating their lunch of sticky rice from banana leaves. We walked around and in several others as well, including Bakong, Lolei, Preah Khan, the underrated Banteay Kdei, Tommanon, Srah Srang, and the Terrace of the Leper King. Along the way carven naga heads, elephant trunks, and brahman horns had been chipped off the exotic stonework by centuries of looters. 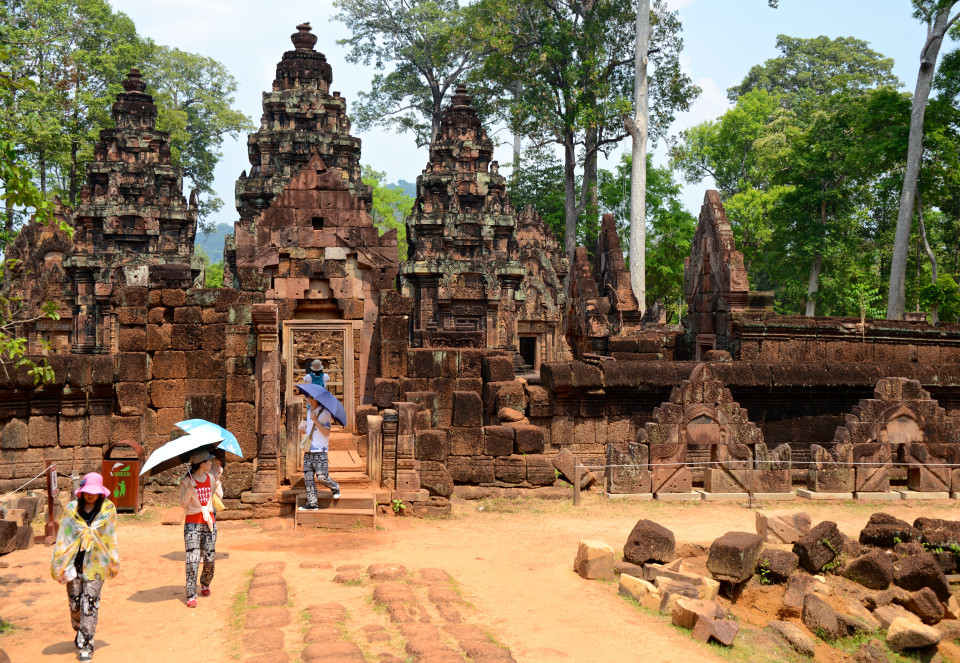 Outside the complex walls, livestock rambles about and stray dogs snuffle the edges of garbage heaps seeking a treat. Roosters own the sun, announcing its arrival throughout the day. Children, powdered in orange clay dirt, play chase in the shade of bamboo and thatch huts while their stoic parents criss-cross stubbly fields, shouldering woven baskets heavy with tools, food and buffalo dung. Walking along the well-worn paths from village to village is careful work, as it is estimated that Cambodia’s fertile rice fields still hide 4-6 million landmines.

The temples, or at least their parts, serve utilitarian purposes today too. Stones that once bore epic tales in bas-relief are now used to prop up a shed or shore up an irrigation gate, likely stolen from the temples centuries ago out of necessity. Their intricate carvings have long been worn away and are now minerals clinging to the roots of jackfruit trees.

Everywhere we walked merchants crowded us, pressing souvenir books or water or thin cotton dresses into our faces. They want U.S. dollars, not the local currency.

We visited Tonle Sap, the great lake of Cambodia, where villages float atop Styrofoam blocks and pontoons. Movements here are languid or maybe economical, barely visible in the constant sun, which aims to pummel residents into dust like the temples. The great lake, more polluted in the dry season as it shrinks to half its rainy season shoreline, provides water for everything – cleaning fish, bathing, laundry and drinking. Young children, perhaps five or six years old, solemnly row themselves along the main channel to check fishing lines as long tail boats motor past, their propellers leaving a line of yellow froth behind them. Along the reedy banks, we searched fruitlessly for alligators and instead saw warrens of twisting paths of sun-hardened earth that splay the land once nurtured by kings. 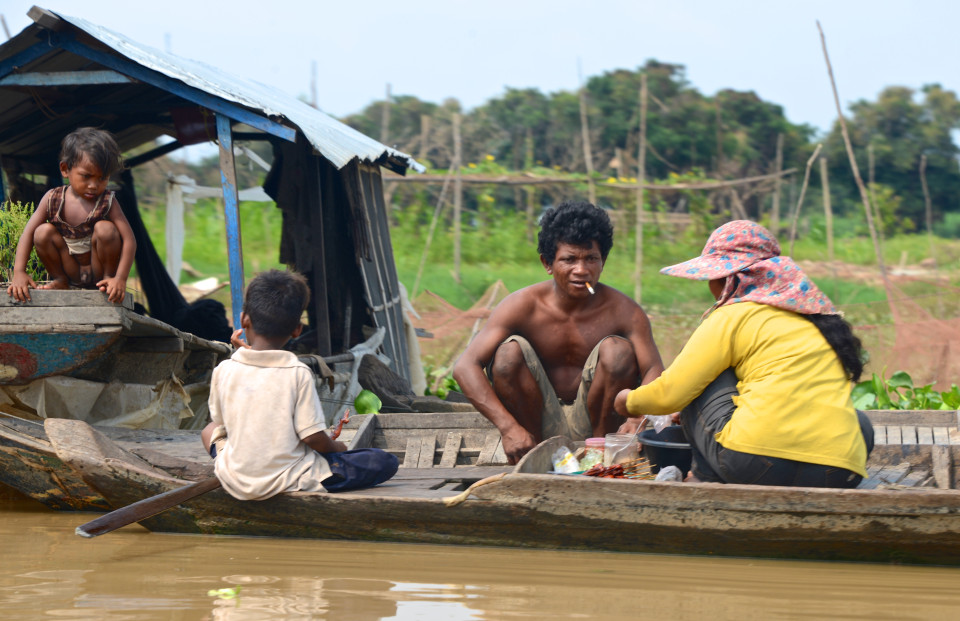 The local market known as Phsa Leu in Siem Reap is a patchwork of clothing vendors, fruit stands, meat markets and jewelry stores all under one hot tin roof. It’s nearly two city blocks square in size and not on any “Top Things to Do” tourism lists. We weren’t interested in buying postcards or Angkor Wat snow globes (which really can be bought in Cambodia). We wanted to experience something more real.

Despite its size, the market is difficult to see from the road due to the reef of tightly packed motorbikes, tuk-tuks and bicycles surrounding it. Along the outer edges, we surfed the food stands. Here there were colorful produce stands loaded with durian, dragon fruit, rambutan and mango. Merchants sold scoopfuls of fresh-steamed snails flavored with lemon grass or hot peppers and liberal quantities of salt, or raw skinned chickens that they piled high on wooden carts. Instead of Starbucks, shoppers refueled at soup stands that offered a dozens of pastes that were mixed with hot water and rice on demand. 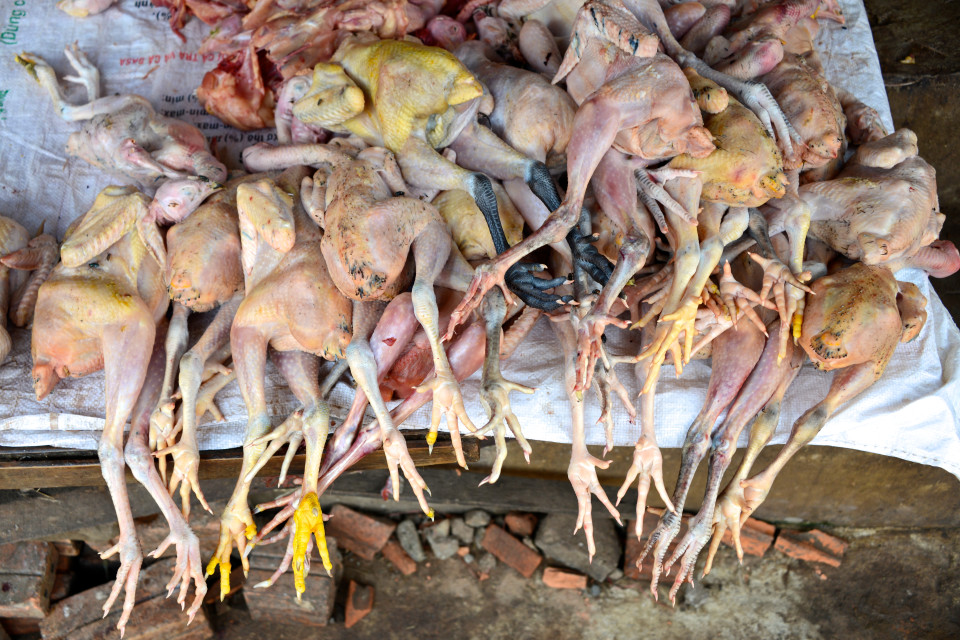 Since this was a local market, no one approached us to buy anything. In fact, they mostly stared at or ignored us, which suited us fine. Inside the massive building, we were nearly run over by motorbikes that cruised through the narrow alleys between the stalls; the combination of dim lighting, sultry heat and smells of raw meats was disorienting. The market’s center was a cottoned hush, with elegant handmade dresses and colorful costumes hung so thickly they blocked out the cacophony of street noise. We got lost a few times, and found, and lost again.

WAITING FOR THE SUN

We awoke at 4:00a to watch the sunrise over the sediment-filled East Baray near Srah Srang. It is a common spot for tourists to photograph the natural beauty of the sun rising over the temples; some choose the much busier Angkor Wat to do the same. 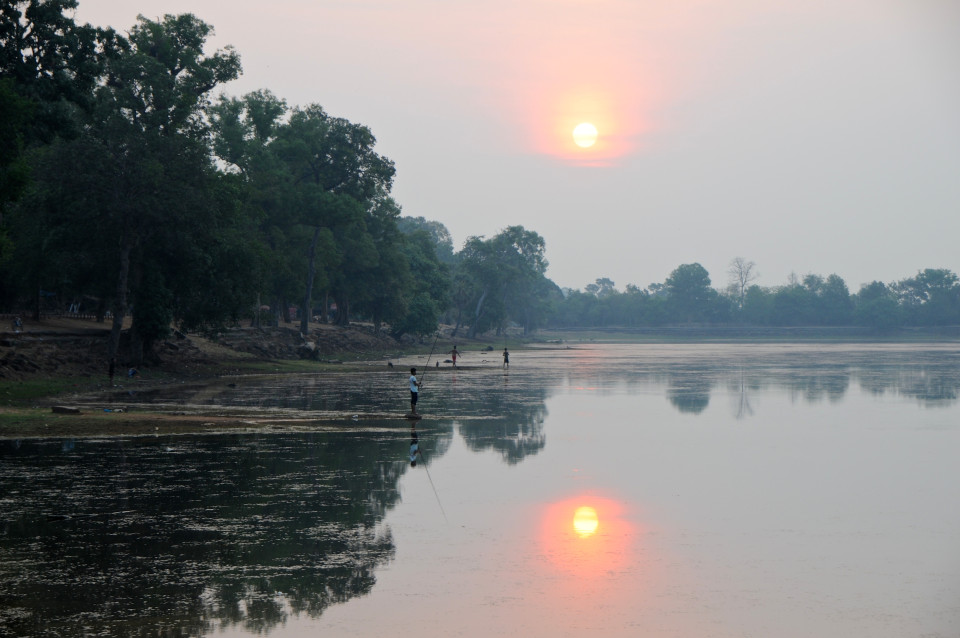 As we sat alone, scrawny roosters strutted along the stone-lined quay and biting flies buzzed about. A farmer and his buffalo crossed the shallow waters midway down the pool; fishermen worked on hooking breakfast. At huts surrounding the pool, women huddled over sizzling pans and vendors prepared for the busy workday ahead. It was another day just like every other one before it. It wasn’t special or unique. It just was.

The gauze of orange haze like dewy spirits rising from the earth enveloped us, and we all breathed quietly. No one spoke. We were waiting for the sun.